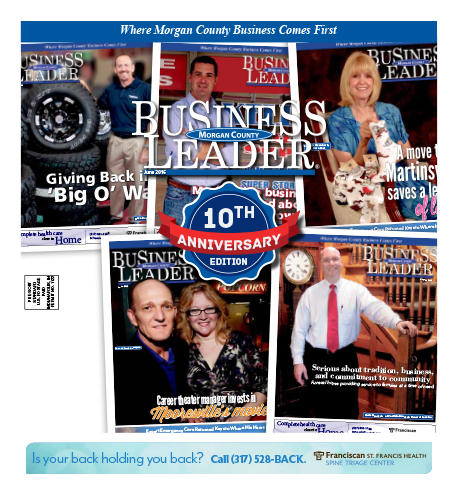 Stay ahead of the curve

In August, 2011 when Chris Branson, owner of the Carlisle-Branson Funeral Service and Crematory, was featured on the cover of the Morgan County Business Leader, he had just added the crematory building and begun providing cremation services.
“That was a good move,” Branson said. “We have reached a level that is appropriate for us. It is what we had envisioned and it was the appropriate thing to do for the community.”

When Joe and Sarah Avampato came to Mooresville to bring Showtime Cinema back to life, they had two expectations; to become a part of the community and to make a living. “We are doing both,” Joe said, “and we love it here.”
The June, 2013 issue of the Morgan County Business Leader told of a movie house that had to be updated to make it modern enough to handle advances in technology. The couple had to install state-of-the-art digital projectors just to be able to bring movies to town.

Dedicated to support and service

The July, 2011 cover story featuring Dave Doyle and Big O Tires, Doyle had said, “We feel it is our duty and responsibility to help our community.” One way was that the company was the lunch sponsor of the Mooresville Chamber of Commerce meetings since at least 2008. Big O continues to be the lunch sponsor, which shows that while change is byword, Doyle’s commitment to the residents and business community in Mooresville has not changed.

When Sharon Rivenbark started For Bare Feet in 1984, “There wasn’t a possibility that it wouldn’t be successful,” she said, “There just wasn’t any
other option.”
In the April, 2013 Morgan County Business Leader article, she recounted how production began on an old knitting machine and then how the company faced a devastating fire, which prompted the move to Martinsville.

Time for business and community

According to Chip Keller, building a business is a process. “You have to put in the work day-by-day,” he said, “you make baby steps, never burn bridges, and make connections.”
That is what he has done in the years since he was featured on the cover of the Morgan County Business Leader in September, 2011. At that time, he had just opened up online ordering. Now, that is how the vast majority of his customers place their orders online.