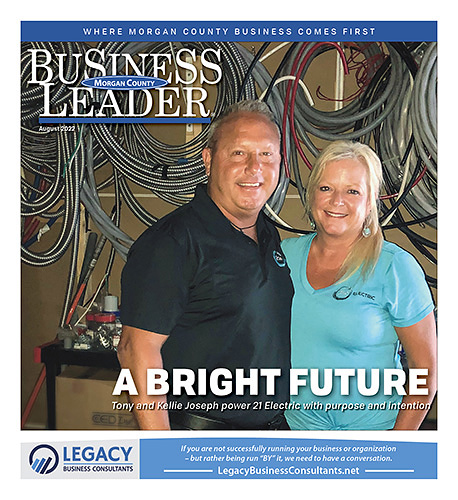 One thing economic fluctuation does is drive businesses to reassess their business model and the diversity of the products and services they provide. It was seeing possibilities that prompted Tony and Kellie Joseph to begin 21 Electric in 2019.

Tony’s 37-year career in the electrical industry began when his parents retired and sold their grocery store business in Fountain Square. Their sons were looking for new careers. An electrical entrepreneur offered the eldest son a job and the education to do it. “He took it and ran with it,” Tony said. Another brother followed his lead and when it was time for Tony to make the decision, he chose trade school over college.

He went through the four-year program with Associated Builders and Contractors and before he graduated, he was working for a local firm. “I liked it because of the mental challenges that were set in place,” Tony said. “I always wanted to challenge myself to become the most valuable an employee I could become.”

He moved to the International Brotherhood of Electrical Workers (IBEW) shortly thereafter where he spent the next 20 years. Wanting to learn about every aspect of electrical work, he found himself a general foreman working in the highest levels of fieldwork on some of the largest construction projects in the area.

Ready for a new challenge, Tony left the fieldwork behind and went to work for a smaller commercial contractor inside the office as a project manager. Seeing the opportunity, and need, to diversify, Tony encouraged the owner to pursue residential work. When the owner made the decision to not expand services, Tony began to do that work and in 2019 started 21 Electric out of his home serving both commercial and residential customers.

THE HEART OF 21 ELECTRIC

Down Syndrome is the result of an extra copy of the 21st chromosome. This extra copy changes the way a baby’s body and brain develop. “Brody is high functioning,” Kellie said. Although he is mentally delayed, he is on track to graduate with a Tony and Kellie Joseph power 21 Electric with purpose and intention certificate of completion and is healthy with a strong heart. “Brody is very social,” Kellie said, “everyone knows Brody.”

The Josephs have been very active with several organizations focused on Down Syndrome, such as Down Syndrome of Indiana. It is an organization with support groups for parents and families as well as events like the Buddy Walk and a golf outing.

Tony grew up with a special needs sibling. He knew his brother could not function without the help of his mother and their situation was simply their family makeup and dynamic. When Tony met Kellie, a single mother of three with Brody, a special needs child, there was no reluctance to become a family.

When the couple decided to start the business, they wanted the name, and the business, to stand out and have meaning. “We wanted it to include something that affects our life,” Tony said. The name 21 Electric is a reference to the 21st chromosome and the three arrows on the logo represent the 3 chromosomes.

However, referencing Down Syndrome in the name and logo was not enough. They are carrying their philanthropic work into the business. A donation is made in the customer’s name of a portion of sales from specials in addition to their own company sponsorships and donations. “We wanted to do something that is going to help us give back to the community,” Kellie said. “It is good to have a purpose,” Tony said. “It is the added drive to what we are doing.”

Tony said, “There are so many different variations of electrical that at the end of the day, it challenges you.” He said he has never gotten bored. “There is so much to it, and it gives you an equal amount of using your mind as well as your hands. A lot of the trades don’t do that.”

He says there are times he misses the instant gratification of fieldwork. After all, when the job is finished you can flip a switch and see the lights come on.

However, he confronts the challenges that come from changes in the industry, market, and supply chain that require adjusting the business. He says his experiences gave him the skills he needs for fieldwork, management, and running his own business.