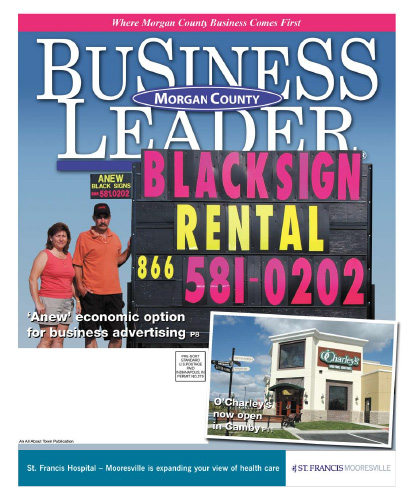 Black Signs was establish in Minnesota in 1998, and quickly became a prominent, popular feature for Minnesota businesses. In fact, as the owner of the Ronneyby Bar in Minnesota, Glen Witham had rented Black Signs for his business on many occasions over the years. Shortly after moving to Martinsville, Witham realized the signs were nowhere in Indiana. Sensing an opportunity, he entered into a partnership with Black Signs to offer the same services in Indiana and Kentucky on an exclusive basis. Witham opened under the name Anew Blacksigns in May 2007.

Black Signs are an economic, high impact advertising option designed to help small- and mid-sized merchants get messages out to passing motorists and pedestrians. “We’re a portable, temporary system, most appropriate for weekend sales, daylong events, or month-long specials,” Witham explained. “Having said that, some businesses are so pleased with the result, they simply have me switch out the sign every 30 days.”

According to Witham, an Anew Blacksign offers five-times the visibility of a lighted arrow sign. “A lot of businesses buy those signs, thinking they’re going to use them on a regular basis, but then the owner gets tired of having to change it all the time, and they leave it blank or display it with missing letters.”