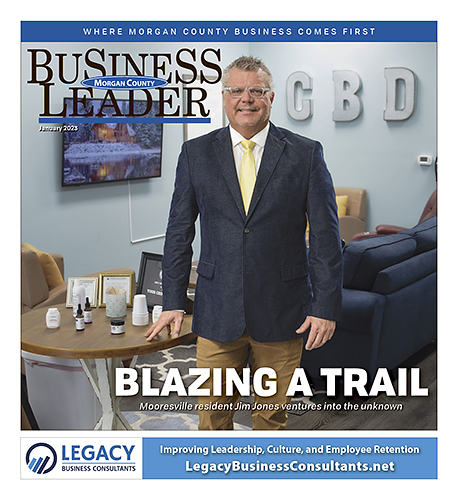 In the beginning, Jim Jones didn’t know a thing about CBD and he never would have dreamed he’d be in the business of selling it.

“I started to read, educate myself, watch videos and get all the information I could behind it and it expanded my mind to what this product could do for people,” he said. “To the point that I started using it. Then I started having customers use it and saw what it did; I was flabbergasted. It was pretty amazing.”

He opened his first of now three Your CBD Stores early 2019. However, this was not his first journey into entrepreneurship as that began at a young age when at 20 years of age, Jones started his own business with the Kirby Company, a manufacturer of vacuum cleaners. He moved to Indianapolis in 1996 to place himself and his growing business in a bigger market. He and his wife, Kara, later relocated to Mooresville. He ran the distributorship in Indianapolis until 2015, when he retired at age 50.

“I was too young to be done,” Jones said. “I had some things I wanted to do. I had some friends in the CBD business. I started looking into that and found a lot of useful information. People were just starting to learn about it in 2018. We opened our first store in February 2019 on the Northside. It was basically blazing a trail of something that had not been done yet.”

In the beginning, Jones faced many struggles that stemmed from a misunderstanding of CBD and what it is. While CBD is a compound found in marijuana, the CDC describes it as “not impairing, meaning it does not cause a ‘high.’” CBD can be derived from hemp or non-hemp plants. In 2018, the U.S. Congress signed a law which removed hemp from the federal Controlled Substances Act, which legalized CBD if it comes from hemp.

People use CBD to treat chronic pain, anxiety, insomnia, and other ailments. It can even be given to their pets for pain and anxiety. However, not all CBD is the same. “If the CBD is cheap, that’s a really bad sign,” Jones said. “Don’t overpay for it but good things aren’t cheap and cheap things aren’t good. I tell people, even if they’re not buying here, here’s the things that you better look for. If it’s super cheap, stay away from it. That’s the first sign of bad CBD. The best thing is to make sure the product has a QR code. That QR code should be able to give you a lab test. Make sure the lab test is current. And that lab test should tell you what’s in that bottle. You need to know what’s really in there.”

Jones said his shop carries SunMed CBD products, the best he could find, and has purchased the formulation for things such as the gummies to have the freedom to package it with their own labels, something to reflect that it’s more of a wellness product.

Since CBD comes in many doses and forms – water soluble, oil-based, gummies, etc., – each will help with a different ailment. Jones said he tries to educate his customers, first and foremost, to ensure they’re buying the right product.

“It’s too expensive to try a bunch of things so we try to get the right thing in their hand the first time,” Jones said. “That’s hard to do. And we take it seriously. Sometimes that’s hard for me. I want to get this right. I want it to work for them. Then we give them our card and tell them to call us if they have any questions.”

Simply getting the business started proved to be more difficult than Jones anticipated.

Even though CBD is a legal product both in Indiana and the US, there were obstacles. “There were many banks that wouldn’t do banking with us because we were CBD,” he said. “Credit card companies would not take us because we were CBD. Some locations, rental buildings we were trying to find, wouldn’t let us in because of CBD. The problem is a lot of people were so uneducated about the CBD business. So, we had to work to find a place that would let us in, we found a bank that would let us do banking then we went through three or four different credit card companies, where they would take us then one day they just said, ‘no more.’