Cutting Through The Clutter 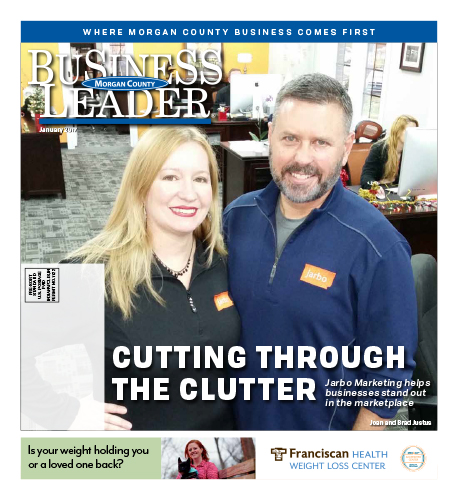 In 1982 Prince wrote and performed the anthem, 1999, which was the turning point in his career. Brad and Joan Justus must have been listening, because the year 1999 was a major turning point for them, too.
It was in 1999 that the couple got married, moved their family of four to Mooresville, bought a home, and they both changed jobs. Brad quit his new job after three months and launched Jarbo Marketing. Twelve short months with a lifetime of major changes.

Both trained graphic artists have since then added two more children to their family, grown a business that is now housed in its own suite of offices, employs five full-time employees, and contracts with a host of freelancers. To say their year of change was all for the best is making light of their accomplishments. Brad had been in college studying for a career in education when he joined the Army. He was assigned to a nuclear weapon and deployed to West Germany. He was there when the Wall went down in Berlin.

When he returned to the states to finish his education, he found that his perspective had changed and he no longer thought like his other classmates. He changed his major to graphic design and also discovered that the world of business had changed, too. You no longer had to live in a large metropolitan area to be a graphic artist. He could work from anywhere – including the heart of Indiana, close to home in Mooresville.