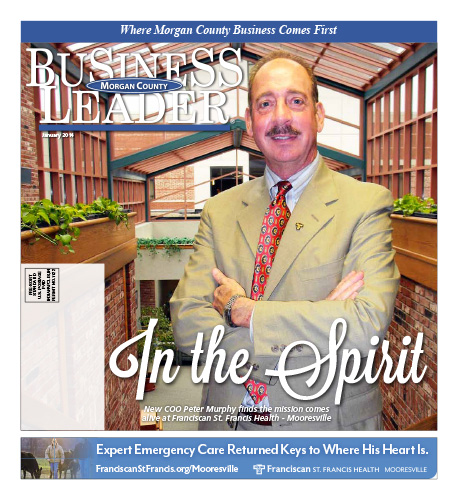 In the few short months since October, 2013 when Peter Murphy joined Franciscan St. Francis Health – Mooresville as Senior Vice President and Chief Operating Officer, he has seen what he needed to see to know he fits there.

“When you go into a lot of hospitals,” says the 30+ year veteran of healthcare services, “people are focused only on their work, their department, their area. But here, whenever there is an issue like an emergency in the hallway or someone needs help in another area, it doesn’t matter if you are a manager or an executive, you go help, without feeling burdened to be helping in another area. There is a ‘we’re all in this together’ attitude here. There’s a definite element of spirit at St. Francis. It’s palpable.”

That combination of healthcare expertise and sprit is important to Murphy. “I have been affiliated with Catholic healthcare my whole career. There is a personal and professional bond that exists for me.” Although new to Mooresville, Murphy has been in a variety of leadership positions in the Franciscan Alliance. Notably, he served as chief executive officer for Franciscan St. James Health in Illinois, overseeing award-winning operations and expansion including national distinction as a Top 10 Most Innovative Facility for the integration of Franciscan St. James – Olympia Fields and the Chicago Heights campuses. During his time at Franciscan St. James, focus on quality also brought national recognition from Healthgrades with a Distinguished Award for Clinical Excellence and it was named as a Top 100 Cardiovascular Hospital by Solucient.

However, previous achievements were not what Murphy wanted to discuss. He wanted to talk about Franciscan St. Francis – Mooresville and the importance of the sense of mission and strong Catholic heritage that is the basis for the service provided to the community and what that means for patients and the Morgan County area.

“In the history of this hospital, with the transition from the original Kendrick Memorial Hospital to Franciscan Alliance, the one common denominator between then and now has been the respect and care caregivers provide when people walk through the door,” Murphy says. “There is an attitude. It’s reflected in outcomes and patient responses. It’s a positive attitude from the employees and their relationships with patients; a warm home welcoming feeling, a sense of compassion nd camaraderie that you don’t see in other hospitals.

“This is the friendliest place I have everworked…