IT FITS TOGETHER NICELY 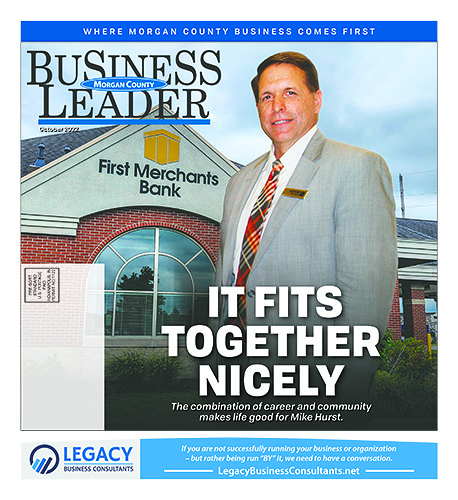 For many years now, Warren Buffet has advised people seeking success to “do what you love.” Mike Hurst, the President of Region Banking for First Merchants Bank, takes Buffet’s advice one step further. He says his satisfaction in his job and life comes from doing what he loves in the place he loves.

Hurst grew up on the family farm in Martinsville. For just over a decade, he lived in Noblesville. However, when he and his wife, Pam began their family, they made the decision to return to Morgan County. At the time, Pam worked at General Motors in Marion, and he was working downtown in Indianapolis, so Martinsville was how they split the difference in distance. It was also the place where they wanted their children to grow up, close to the farm and family.

Their son, Jacob, is now on his own, but getting married soon and buying a home back in Martinsville. Elena, their daughter is in her final studies at Purdue. The years have passed, but the family is still centered in Martinsville.

ON A PROFESSIONAL PATH

When Hurst left Morgan County to go to Purdue University, he thought he might like to be an engineer. It didn’t take him long to realize that his other classes, in business, were more appealing. He says he decided engineering would not lead him to a career he would enjoy. After a period of discovery, he settled into two areas of study and graduated with bachelor’s degrees in both Business Management and Psychology, as well as a master’s degree in Psychology.

Those decisions would indeed lead him to the career he would enjoy. “Business and psychology are a good mix,” Hurst said. “Business is relationship driven. It is all about connecting with people.” He says he loves meeting and talking with people. He takes the time to understand their thinking, their life, and their businesses. It is those insights, combined with his own personal nature, that satisfy him and has helped him build relationships over the years. Relationships often start out business-related but evolve into long-term friendships. He said, “If you don’t like someone, you probably won’t do business with them.”

Not only were Hurst’s choices at college beneficial, but he also says the path of his career has been better than he could ever have planned. When Hurst graduated from Purdue, it was at the height of the Savings and Loan crisis. He took a job as a bank examiner under the Federal Home Loan Banks. He was working with Savings and Loans in Michigan, Illinois, and Indiana. “I wouldn’t have picked that job to start my career,” Hurst said, “but I learned more about banking during those 9 years than I would have learned working in a bank.”

As Savings and Loans closed and the crisis subsided, the agency began to contract. Hurst saw it was time to move on and seized an opportunity to work at National City Bank. He started as a loan review and credit manager, moved into the sales side, and ended up managing sales teams in commercial banking. “I moved from behind the scenes to a customer-facing role as a direct face-to-face relationship manager,” Hurst said. “It was then that I found building and maintaining customer relationships was the best part of the job for me.”

National City Bank was a large bank and after fifteen years when Hurst found the opportunity to move to a growing community bank, it was a new environment, and he was intrigued. “First Merchants bank is a community-focused bank,” Hurst said. “It was a different style of banking and after 14 years with First Merchants, it still appeals to me.”