It Was The Right Thing To Do 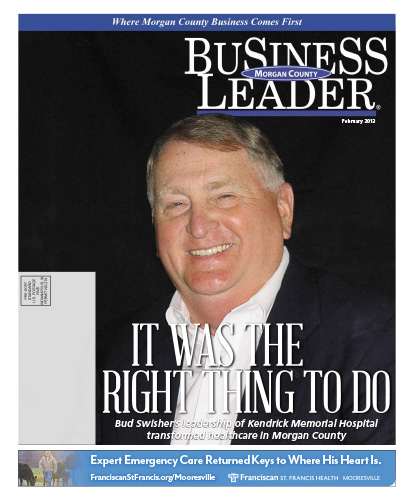 Whether you believe leaders are born that way or hone their skills as they mature, you know when you have been in the presence of a real leader – someone who has made a difference.

One such person in Morgan County is Charles “Bud” Swisher. The list of ways his actions have touched people is long. At the top, for the residents of this county is his involvement with what was once the J. K. Robbins Sanitarium for the Treatment of Rectal Disease. It would be no surprise if you weren’t familiar with that organization, it was a 10-bed medical facility established in Mooresville in 1885 – and it burned down in 1936.

Privately owned by Dr. Jonathan (Jot) Comer, it was relocated to his private home at 130 N. Indiana and called the Comer Sanitarium. His sons, Drs. Kenneth and Charles Comer joined his practice and after Dr. Jot Comer retired in 1947, the facility was renamed the Comer Hospital. It was April, 1951 when Louise Swisher, Bud’s mother, started to work for the Drs. Comer. Bud was nine years old.

In 1956, Dr. Charles Comer died and Dr. William Kendrick joined the practice as a partner and the name changed again to Comer-Kendrick Hospital. Readers may remember when the hospital became Kendrick Hospital in 1962 when the remaining Dr. Comer, Kenneth, left the practice to become Morgan County State Board of Health Officer.

During Dr. Bill Kendrick’s tenure Louise worked as a surgical assistant during the day and did the Kendrick Hospital bookkeeping in the evenings. The hospital was converted from a sole-proprietorship to a Not-For-Profit organization around 1967-1968 and, according to Bud, it was then that the fire marshal was threatening to shut the facility down unless they were planning to rebuild.

At the time much of the land around Mooresville was apple orchards and Johnson Orchards owned property that Louise thought would be a good location for a new hospital.

“Mom was tenacious about it,” says Bud. “She would go to Greencastle regularly to try to convince the heirs to the Johnson Orchards to sell the property.” Eventually she was successful and she and her husband, Senator Paul Swisher, bought the original 30 acres for the hospital site.