Lean Toward The Future 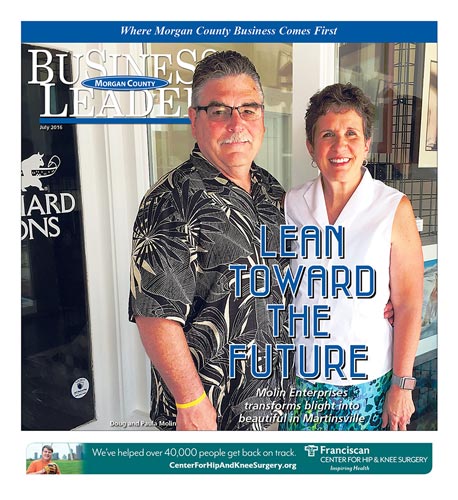 One of the common threads that runs through many stories of successful businesses is the act of owners putting their heads down and striving to do purposeful work.

The story of Molin Enterprises, led by Doug and Paula Molin, exemplifies
the point.

Molin Enterprises is a home-based business. There is no suite of offices or large staff. There are two people who started out with an interest in taking vacant or rundown property and making it functional, useful and beautiful again.

Doug Molin is employed full-time by the MITRE Corporation, where he uses his 40+ years of experience in all facets of air traffic control and FAA facility management and executive know how in his current role as Director for Center for Advanced Aviation System Development’s (CAASD’s) Air Traffic systems and operations. His work is demanding.

But what he does outside his career is also demanding, in a different way.

According to Paula, family has always been the priority. “Doug works very hard and family is the center of life. He’s a great dad, and a wonderful husband,” Paula said. Which, after 41 years of marriage, is high praise. Both spouses separately referred to each other as their best friend, which may be part of the reason that together, they not only run Molin Enterprises, but they have also lived in multiple states, moved 19 times, reared eight children, and are blessed with 22 grandchildren.

The couple landed in Martinsville, choosing to make it their home for the last 25 years. Paula said, “It’s been a very busy 41 years.”

The fact is, Molin Enterprises has it’s beginning in the home that the Molin family purchased in Martinsville more than 25 years ago. The lower level wasn’t finished and Doug didn’t want to pay the price quoted to him. So he developed the skills needed to do it himself, pulling in the family to help.

After the children were out of school and on their own, Doug encouraged them to buy homes “that needed a little love” and then the whole family flew in to do the rehab creating a wonderful home and instant equity.