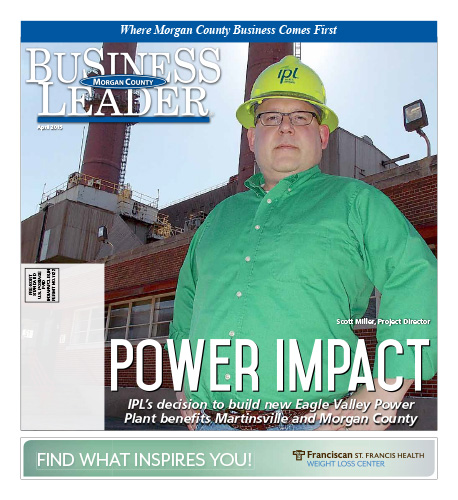 Evolving federal regulations, especially in highly regulated industries like energy and utilities, mean that change is inevitable. Nowhere is that truer than at the Indiana Power and Light (IPL) Eagle Valley Power Plant in Martinsville. IPL is now a company owned by AES Corporation in Arlington VA. Indiana Power and Light built the plant in 1948 and it was determined that the cost to bring the plant into compliance with new regulations was prohibitive. The plant had to be shut down. A hard decision had to be made. A new plant could be built in a new location, or at the Eagle Valley location. Either way the existing plant would have to be de-commissioned.

The final decision brought Scott Miller, AES project director, to Martinsville in the fall of 2014. The existing power plant will be retired in April, 2016 and a new, state of the art facility will replace it. Miller, who will oversee the project, explained the decision. He said, “We were going to have to retire the plant, but we value the relationship with Morgan County and Martinsville, so we are replacing the plant here instead of relocating.” The closing of the plant would have meant that the 25 full-time, permanent jobs the new plant will provide would go to another community. He continued, “Typically when you determine where to place a plant, you look for three things and all three were satisfied here. First, the location is near an IPL transmission interconnection. Second, a plant needs to have a source of water. This location uses wells. New wells will be dug to replace the existing ones due to their age. Lastly, connection to a fuel point. This was the greatest shortfall, but we are working with Vectren to install a natural gas supply line to the site.” Miller says that AES is building the new plant to meet IPL’s forecasted needs for energy and to replace the existing plant’s capacity. The new plant will be a combined-cycle gas turbine (CCGT) system and will produce two times the electricity capacity of the existing plant. The CCGT combines a natural gasfired turbine and a steam turbine to maximize efficiencies. Not only will the new plant produce double the electricity capacity, it will do so using more natural gas than coal, reducing emissions by almost 98 percent over the existing facility.

For more than two decades Scott Miller has worked for AES. He has managed several plants and plant construction projects in the U.S. and around the globe in places such as Wales, Bangladesh and Kazakhstan. His wife, Mona and four children Kyle, Ryan, Carly and Dylan will be joining him in Martinsville this coming summer. (At least those children who aren’t away at college will join him.) Originally from Maine, Miller intended to be an engineer on ships in the Merchant Marines. “I always knew I wanted to be in power generation, either onshore or offshore.” He stayed onshore after moving up in the organization from a material handling technician moving coal in 1991.

“I love that I have been with the same company and stay in the same line of work but progress and have changes of scenery every three to five years,” he says. He describes his role as community interface, bringing financial accountability and responsibility, and, very important, safety. “It all boils down to how well you interface with people and motivate people to do the right thing,” he says.

Even though Miller has been in Martinsville a very short time, he says, “I like the candidness and friendliness of people in Indiana. When there are three people standing in line, you strike up a conversation. It’s not like that everywhere.”