STEPPING OUT TO STEP UP 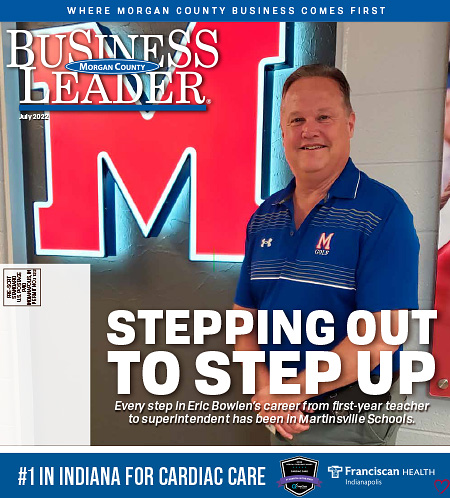 In 1989 Eric Bowlen was comfortable. He was married to Lori, had a good job in sales, a condo in Indianapolis, and was also working with a new initiative, the Governor’s Commission for a Drug-Free Indiana.

Working with the Commission for a Drug-Free Indiana, Bowlen was coordinating Coach Knight’s commercials through his son, Tim. Bowlen had known Tim when they were kids playing baseball. They got reacquainted and became good friends.

One of his assignments for the Commission was to get Bob Knight’s autograph on a marketing poster so he happened to be at a practice that was always closed to the public. “Coach Knight had pulled the team together at center court and asked a rhetorical question,” Bowlen said. “He asked them ‘Why is it that you are going to compete for conference and national championships when there are other players on other teams with more talent?’” He was not expecting an answer, just that the juices begin flowing in the players’ heads.

“Then,” Bowlen said, “Coach Knight said, ‘Champions push themselves out of their comfort zones more than anyone else. My job is not to be your friend. My job is to push you out of your comfort zone. To push you to be a champion…’”

A CHANGE IN DIRECTION
Those words weighed on Bowlen’s shoulders for days. He went home to Lori for a serious discussion. “I had always wanted to teach and be a coach,” he said. “No one in my family had gone to college and here I was 26 years old, married, and with a pretty good job.” He shared Knight’s words that were taunting him. He also shared that although he was comfortable, he was not doing what he wanted to be doing. He took Coach Knight’s words as a sign that he should push out of his comfort zone and go back to school so he could teach and coach. Lori said why don’t you do that?

They sold the condo, moved into a 10×50 construction trailer, resigned his job, and enrolled in Indiana University in Bloomington. Shortly, Lori joined him as a student in the interior design program. Times were lean but they were both focused on personally fulfilling goals.

MAKING THE MOVE
Through the years, Bowlen admired Coach Knight and being in proximity occasionally at IU fueled Bowlen’s dream. He built up his courage to have the nerve to go to talk with the Coach. He sat down across the desk from his idol. Knight looked up and asked, “What can I do for you?”

Bowlen told him that he wanted to be a coach and a teacher, and he would like to learn everything he could from him. Knowing he was not qualified to be an assistant on the coaching staff, he said, “I want to be a manager for you.”

Knight laughed and told him that no, he did not really want to do that. “He asked me why I would want to wash jocks and dirty uniforms.” Then he said words Bowlen could only dream of hearing. “He told me if I wanted to be a coach, I could come to practices if I came with a notebook, pen, and kept notes then I could ask any of the staff questions. Doing that, he would make it possible.”

Bowlen said, “It was a gift. He could have shot me down pretty quickly, instead I had a front row seat and was able to learn at the foot of a master.” He unfailingly showed up to practices and took notes every day over the next four years. His relationship with Tim and Coach Knight grew from there and he went to work for Coach personally as a coordinator for Bob Knight Basketball camps and clinics. The work not only powered his dreams it paid for school, too.

According to Bowlen, that one meeting was the opportunity and that, along with the support of his family lead him to being able to step into the superintendent’s role in the Metropolitan School District of Martinsville in 2022. It was not just that he learned coaching skills from Coach Knight, he learned life skills as well.