THE MISSION IS ALIVE AND WELL 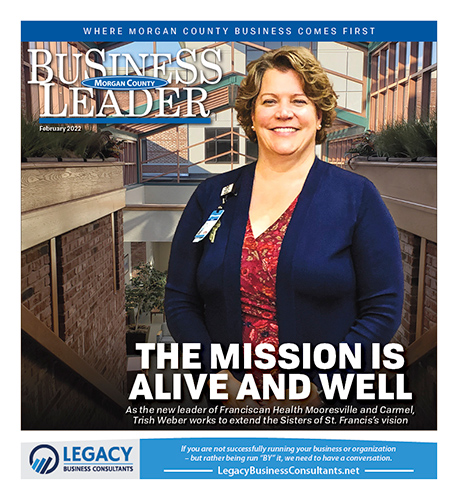 Trish Weber was named Chief Operating Officer of Franciscan Health Mooresville and Franciscan Health Carmel in May 2021 after the retirement of Peter Murphy. The youngest of seven children, Weber grew up outside Boise, Idaho. Her eldest sister was a nurse, which inspired Weber to pursue nursing as a career. Her path began as she volunteered in a nursing home, graduated high school at 17, and started nursing school in Los Angeles the following August.

She stayed in the Los Angeles area for 14 years as a nurse. She married Nick Weber and their first child, a daughter, was born there. However, after experiencing a major earthquake and riots in the streets, the couple determined it was time for a change. When she was pregnant with their second child, the couple decided to move back to Nick’s home-state of Indiana. They relocated to the Valparaiso area in 1996 where they would stay to rear all three of their children.

THE IMPACT OF INDIANA

With such close proximity to Chicago, Weber believed her best opportunities would be in the city. However, not familiar with the Chicago area hospitals and unsure of the job market, Weber took a job as a service line director with Franciscan Health in Michigan City, Ind. She chose Franciscan Health because it was faith-based. In her mind it was also close to home and would be a job for a year, giving her time to do some legwork so she could make an educated decision about where she wanted to continue her career.

The Sisters of St. Francis of Perpetual Adoration was founded in 1863 in Olpe, Westphalia, Germany by Maria Theresia Bonzel. In 1875 they answered a call from the bishop to bring their vision and mission to the United States. Six sisters settled in Indiana and in 1890 they established the first St. Francis Hospital. Today there are congregations all over the world including Indiana, Colorado, the Philippines, and a ministry in Brazil. There are also more Franciscan Health hospitals.

“The tenet of the Franciscan Alliance focuses on education and healthcare,” said Weber. There are two arms: The University of St. Francis and Franciscan Health. The ultimate goal is the mission.”