This IS rocket science! 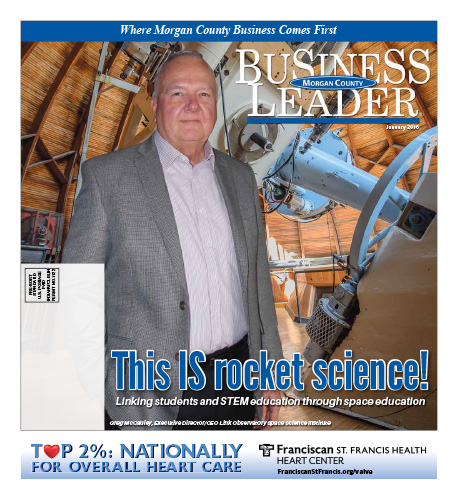 Do you remember where you were on July 20, 1969? That was the day that Neil Armstrong first stepped onto the moon saying, “one small step for man, one giant leap for mankind.”Greg McCauley remembers that day vividly. Still impressed by that event, after two years at Purdue University, he wanted to be part of the space program before it was over. Apollo 17 would be the last flight in the Apollo program. He left school, drove to Houston and got a job working at what is the National Aeronautics and Space Administration’s center for spaceflight activities – NASA.

The Kokomo native was able to work on the team for the Apollo 15 and Apollo 16 spaceflights and was actually in Building 30, Mission Control as part of the Lunar Launch Team for Apollo 17.
“This shaped the rest of my professional career,” said McCauley. He returned to Indiana in January, 1973 and Purdue where he finished a degree in Mechanical Engineering. His career in engineering was primarily in the auto industry, but he retired as CEO from Advanced Imaging, a national healthcare firm based out of Carmel, Ind.
Always an amateur astronomer, McCauley was a member of the Astronomical Society that had been contracted by the owner of the Link Observatory, Indiana University (IU), to be custodians of the facility. “We would meet there in the summer,” said McCauley, “and use the telescope for amateur astronomy.”
In 2012, McCauley and John Shepherd, both members of the Indiana Astronomical Society board of directors, decided to create a nonprofit organization dedicated to public engagement, information and science education in astronomy and space exploration. “Since its inception,” McCauley said, “we have entertained thousands of the general public with programs at the observatory and provided public lectures at a wide variety of venues throughout central Indiana.”
Download Full January 2016 Edition Here.