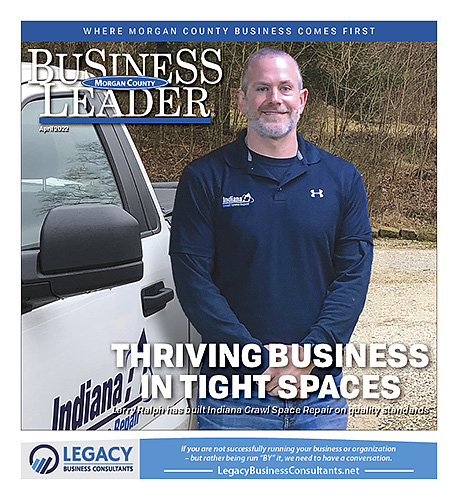 Definitions of unconventional in dictionaries vary slightly, but commonly include, “not usual or ordinary.” From across the room, Larry Ralph appears to be rather conventional. But when you get closer and begin a conversation, you will quickly discover that unconventional suits him. He takes a different and often unique approach to obtain the best results for everyone.

Ralph’s early life was not ordinary. He lived between Martinsville and Haiti with his parents as part-time missionaries. He was home-schooled in Haiti, but locally he attended Tabernacle Christian School.

His family has a long history of entrepreneurship. In Kentucky, his grandpa had a gas station. Later he joined his brothers, and they started a business in Indianapolis.

His father was always self-employed. It was his business that funded the mission work in Haiti. When he fell ill and returned home for good, it was natural to start a new business. It was called American Basement Solutions.

While growing up, Ralph worked with his father. He was never pushed to go to college. His father was a firm believer in entrepreneurship. However, having an interest in the growing technology field, he went to IUPUI to study computer engineering. Although he had a knack for technology, it was not a good fit. “All the career tests I took leaned more toward people and sales,” he said. He quit school and went to work full time for his father.

He married Michaela, also a Morgan County native. Then, in 2003, they settled in a home and over time, filled it with their children Kingston, Marley, and Beckham.

At work, he moved up from manual labor to sales, to becoming sales manager, then general manager of the business.

“It felt comfortable and kind of came to me naturally,” he said. He brought technology to the business, and in addition to running daily operations he built a website, began a series of seminars for inspectors, and wrote a blog.

In 2012 he left the family business to join a start-up timber buying and logging business. He soon found that his
work ethic and values did not align with those of his new employer.

His father’s business was always family-centric so when he left in 2012 others stepped into his shoes there. The door had opened for someone new, and he did not feel it would be a good fit to return there.