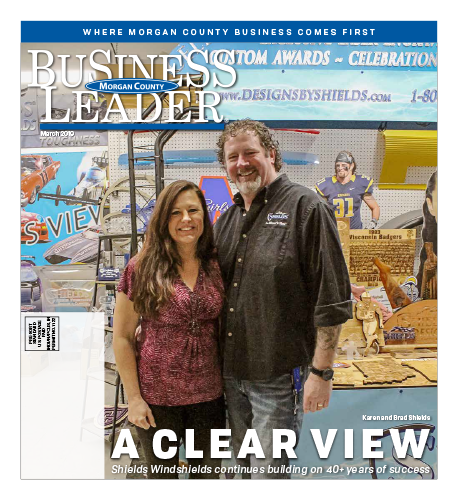 Why is it that so many businesses get their start in garages? William Shields saw a need in the world of plastics. He met that need in the garage of the home he shared with Jacki Shields and their children in Martinsville. He developed a one-piece fairing for a Yamaha motorcycle in 1975, and the rest, as they say, is history. That one product catapulted a new company into eventually creating windshields and windows for heavy equipment, race cars, and even face shields for helmets.

Brad Shields says he grew up in the plastic world. By the age of nine he was working the trade show circuit with his parents. Even though Brad had a career as a teacher and football coach he continued to help his father sell products until he made the move to join the business full-time in 1999. Brad’s wife, Karen and his two children, Beau and Alyxa, moved with him back to his hometown of Martinsville.

“The transition was more in working with my father than working with the plastics,” Brad said. “My ten years as a head coach had given me invaluable leadership experience.” Although William chided Brad for running things like a football program he began to let Brad take the reins of the company. “You have to go with what you know,” Brad said, “and what works. I became a delegator and trust my people to do their jobs.”

Brad’s mother, Jacki, worked in the business as well. “She did HR, finance, payroll, accounts receivable, account payable,” Karen said, “basically anything to do with money or personnel.” Karen has since stepped into Jacki’s role for the company.

Brad’s interest in racing was the impetus to expand the business into that industry. He saw an opportunity. Brad knew that the racing industry is always first at innovation and that it could pay off for Shields Windshields. By 2004, he played a part in fitting out every car in the Daytona 500 with polycarbonate Shields windows. “We can form polycarbonate where others can’t and we have a proprietary process to put a coating on it so it won’t scratch,” Brad explained. These features made their windshields and windows perfect for racing, and subsequently, for heavy equipment. No one had to worry about broken glass windows, which improved the safety in both industries.

The business was growing and they hired Chad Kepner right out of Purdue as engineering manager. He was with the company for fourteen years overseeing the engineering. He eventually became plant manager and was an integral part of the manufacturing process and development.

As industries and markets change, businesses have to adapt and adjust if they are to survive and thrive. Shields Windshields, with father and son at the helm, has done that. “I am terrified of being flat,” Brad said. “Diversifying is important for a good reason. We used to do all the face shields for Simpson helmets, and we no longer do any of that.” Companies go out of business or product lines change.

Currently, the business has three areas. One is a retail line of products which they market and advertise for in publications and at trade shows. The second is Original Equipment Manufacturing (OEM), which is polycarbonate development and production work generally obtained through engineering and manufacturing firms. The last is custom polycarbonate work and that includes applications like the windows on the monorail cars at Disneyworld or the windshields for vehicles that will do their work in outer space. Most of those calls are referrals by word of mouth.