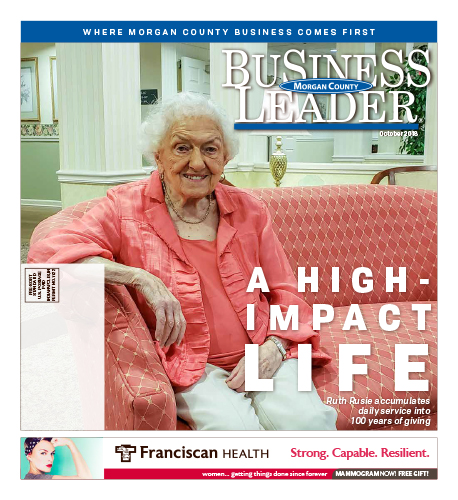 If you have ever resided in Morgan County, especially in Martinsville, it is very likely that your life has been touched by Ruth Rusie in some way. This remarkable woman will turn 100 years old this October. Although that is a wonderful achievement, the list of what Rusie has contributed to the community and county since she came to Martinsville in the 1940s is extensive, wide-ranging, and amazing.

Rusie has been honored and recognized for her service. In 2008, she was named grand marshal of the 49th annual festival parade at her alma mater, DePauw University. In 2014, she was named Senior Volunteer of the Year by CICOA Aging and In-Home Solutions, and in 2015 she received the Legacy Award from the Community Foundation of Morgan County.

Her legacy was celebrated on Ruth Rusie Day, April 24, 2016, by proclamation in Martinsville when she was awarded Sagamore of the Wabash by the Governor’s office. She has also received the Jefferson Award from the Jefferson Awards Foundation. It is a national organization that was co-founded in part by Jacqueline Kennedy Onassis in 1972 with a mission “To power others to have maximum impact on the things they care about most.”

When viewing the list of projects and organizations that Ruth Rusie has been a part of, it is difficult to pinpoint exactly what it is that she cares most about. That is, until one steps back and looks at the person that is Ruth Rusie. Then it becomes evident. The thing Ruth Rusie cares about most is people.

This is what you do in life

Always a Hoosier, Ruth was born in Russiaville and grew up in Royal Center, the youngest of four children. Her father was a banker and her mother a homemaker. Jim Rusie, Ruth’s eldest son, says that her family were all very religious and involved in their church and community, including the Masons, Scottish Rite, and Eastern Star. Every group they were members of offered a willingness to help others. “She learned that as she grew up,” Jim said. “It was part of the expectations her parents had that this is what you do in life.”