A Move to Martinsville Saves a Legacy of Love 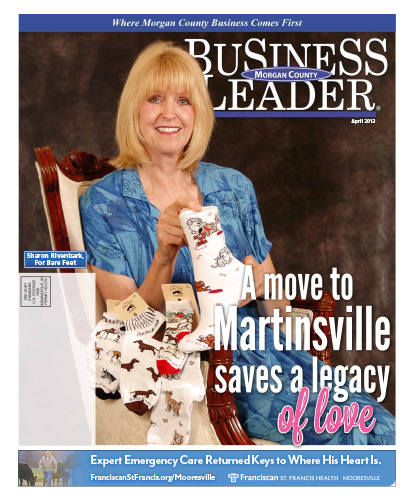 In 1984, Brown County elementary school teacher Sharon Rivenbark started a small business in part to help her son Tim Magnuson. Tim’s rare medical condition resulted in progressive deterioration throughout his teenage years until his death in 1987.

Sharon and her daughters continued the business, in part, in homage to Tim. For Bare Feet grew into an international sock company providing footwear for pro sports teams in the NFL, NHL, NBA, MLB, among others. FBF’s key product lines include sportswear and a healthy novelty/gift line.

But that legacy was threatened in September 2011 when a devastating fire destroyed the production and corporate campus in Brown County. Fortunately, a fast move to a “perfect building” in Martinsville not only saved the company, but positioned it for even greater success.

Sharon grew up in southern Illinois. “My father was a principal, my mother a teacher. My maiden name was Trainer, which was appropriate because my family and extended family were all trainers of children.”

After earning her elementary teaching degree from Southern Illinois University, Sharon taught elementary school for 20 years, ten years in Belleville, IL and ten years in Brown County, IN. “My brother was a salesman, with territory in Indiana. He loved Brown County and talked it up.” Convinced, Sharon and her family moved, and Sharon taught at Sprunica Elementary School from 1974-1984.

In the meantime, her son Timothy had been diagnosed with tuberous sclerosis, a rare genetic disease in which prolific nonmalignant tumors grow on the organs which, over time, cause longterm problems. “The doctors told me that eventually, he’d become mentally retarded. Since Nashville was a tourist town, I thought I’d open a sock shop where Tim could always work.” The arrangement succeeded.

Sharon remembered, “Our original sign said, ‘We make socks for bare feet’ and we shortened that to ‘For Bare Feet.’ I wanted make enough to break even after supporting Tim.” The business launched and with surprising speed thrived in its first four months. Multiple partners stepped forward. “I met the IU Bloomington bookstore manager, who set me up to supply socks with the IU logo on them. A fraternity/sorority gift shop in Bloomington asked if we could do Greek letter designs. A shop in Nashville offered to carry them, ordering a minimum of three dozen at time–a bulk order for a startup business.”

Sharon attended trade shows. It was the height of the 80s, so the company’s core products were hand-made tube socks woven on an antique banner mini-machine. (The machine is still on display in the company’s lobby.) “I started getting requests for women’s style socks, and had to find a mill that would produce those. In the meantime, our retail store took off.”

Sharon requested a year-long leave-of-absence to get the business under control. “I eventually quit teaching because it never got under control. That was a big decision because I was no longer married and the sole provider.”

For Bare Feet helped pioneer logo socks as a gift item. “Other companies ran with the idea, which devastated me at the time, but in the long run, it helped grow the demand.”

Tim’s condition worsened. In the fall of 87, while attending college at IU, he slipped into a fatal coma. Sharon added, “As a child, he tested at a genius-level IQ, and when he died, he still had normal intelligence. We never lost him or who he was, and for that, I’m grateful.” By the mid-90’s For Bare Feet had three of Sharon’s four daughters working in the company. “By ‘95, we’d secured sports licenses, college and pro. That was huge because it meant year-round business, so we were no longer dependent on Christmas sales. We worked hard to get those licenses–this little company from Indiana going to New York to secure that sort of deal. But we knew our product was as good as any others, and the players liked it.”

For Bare Feet grew into a three-building warehouse and corporate campus in Nashville, with a fourth building under construction in 2011. Then a terrible mechanical accident on September 10, 2011, resulted in the entire campus burning to the ground. “The fire completely destroyed our manufacturing and knitting machines,” Sharon remembered. “Most of our inventory was smoke-damaged.”

Seen on security camera footage, a malfunctioning compressor ignited a sock. The sock dropped onto a full bin, spreading the flames rapidly. Fortunately, no one was hurt. With no way to produce product, Sharon turned to a Korean partner to cover production until they could re-open. “We knew we would rebuild, bigger and stronger. Brown County couldn’t supply enough water for a sprinkler system, and the area was serviced by a volunteer fire department. We looked into many alternatives, but they all proved impractical. We started looking outside the county for the best fit. We were also looking for a short commute any direction so we could retain as many workers as possible.” Their search soon took them to Martinsville to an empty large production facility on Ohio Street, a building with a long history of production facilities. “Mayor Deckard called and he said he had a building for us. We took one look around and I said, ‘Oh, my goodness, it’s like this building was created just for us. We’re going to make this work.’” The location offered 225K sq. ft., with 20 acres to expand upon.

For Bare Feet made their decision in early October and were moved in for an official ribbon cutting December 7, 2011. “We installed the necessary equipment to restart production. Getting optimal setup is still a work in progress, but we’re almost there,” observed Sharon. “In spite of that considerable bump in the road, we showed a double-digit increase in business last year, and our international business continues to expand.”

For Bare Feet remains a true family business. Daughter Kelly Baugh is V.P. of Sales, daughter Tina Bode is V.P. of administration, and daughter Mandy Zellmer is President. All four son-inlaws hold positions in the company. Daughter Sheree Mills still teaches in Unionville. Sharon reflected, “This is a legacy to Tim. We’ll never sell it, and I expect it to be here for a long time to come.”