Baking Up a Business 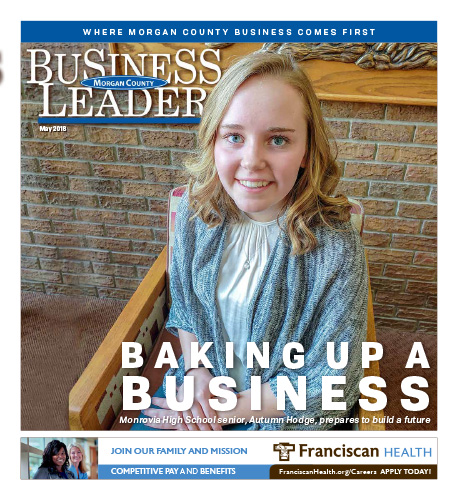 Growing up halfway between Martinsville and Monrovia in the Wilbur area has caused Autumn Hodge to have a slightly different perspective on life today. Her backyard was several acres just down the road from her grandparent’s house. She spent a great deal of her time out of doors, engaged in sports like softball or basketball, or helping in Grandma Wilma Hodge’s garden. With little, if any, cell or internet service at home, she is less tethered to her cell phone or computer than most peo-ple, and she likes it that way. In fact, she says she often has to calm visiting friends telling them they will survive not having cell service for a while.

Her fondest memories of home and family are in the garden and kitchen with Grandma, making jelly, chicken pot pie, and baking up pies, cakes and other goodies. They would start in the garden picking produce that, depending on the season, could range from strawberries, blue- or blackberries, cucumbers, tomatoes or green beans to apples from the trees. She learned to sort, snap, chop, strain, mash, cook, and can the foods into good old Mason jars. They’d cool and be stored in the cellar ready to feed the family all year long. But before that happened, the “extras” would be fashioned into pies and other pastries to eat right away.

Over the years, Hodge moved from the role of helper to more. While she likes canning, she prefers the baking aspects of being in the kitchen. “I like to have fun with ingredients,” Hodge said. “It’s so much fun to make dough and bread, watch it rise, the smell of it, working with it, making different things that please dif-ferent people.”

The pleasure of that is something Hodge wants to hold on to in life. This type of life ex-perience might lead the casual observer to think Hodge is old-fashioned, or out of touch. That would be an incorrect assumption. Ever since eighth grade, this Monrovia High School senior has had her eye on a future in which she intends to bridge her experiences with a career. Her goal is to own and operate a bakery, hopefully in her hometown. With that goal in mind, she has a definitive purpose and is making strategic plans.

At first, she said she was thinking of going to culinary school. “But wait,” she said, “I don’t know how to run a business!”

Read the Full May 2018 Edition Here