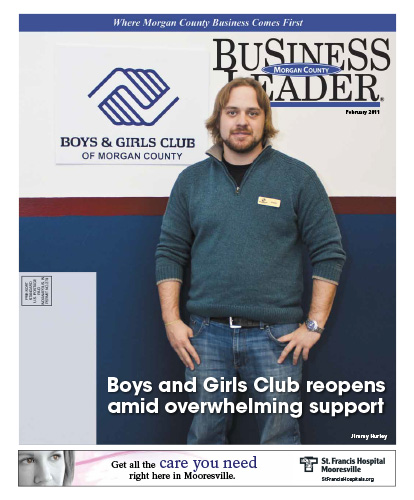 Jimmy Hurley’s first day as unit director for the Boys and Girls Club of Morgan County was December 7. The club officially re-opened its doors at their new location on Monroe Street December 20th. Though new to Mooresville, Jimmy’s connection to the club goes back five years. “I volunteered at the club in Bloomington while attending IU. It started out as part of a service learning project, and I stayed with it as a paid staff member.”

Jimmy recalled, “I volunteered Mondays and Wednesdays in Bloomington, and the kids got used to seeing me at those times. I remember an instance where I had to cram for a test one Monday, and when I returned on Wednesday, I had three or four kids upset with me for not being there. It made me realize how much those couple of hours mean to a kid who may not have a lot to look forward to during the week.”

Jimmy left IU with a degree in nonprofit management. He jokes. “I’m actually using the degree I obtained, which is a rarity in today’s economy.” Following graduation,
Jimmy remained with the Boys and Girls Club, serving in Indianapolis as program director for the Lilly Unit in Fountain Square, until the Mooresville unit director opportunity opened up.