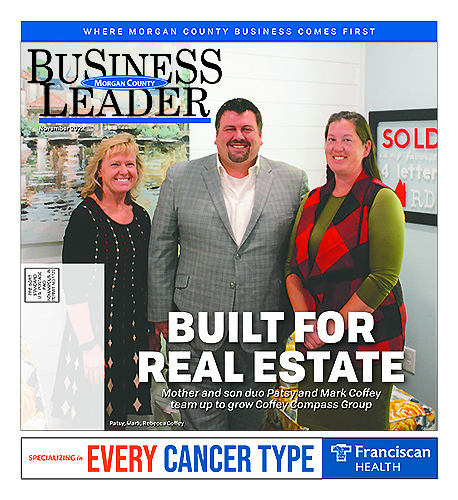 Neither Patsy Coffey nor her son Mark Coffey knew exactly what they were getting into when they dove into the world of real estate. Not afraid of hard work, they put in the hours which resulted in them setting records and achieving awards since they each started.

They are currently in the top 1% of realtors worldwide as it relates to home sales, according to the National Association of Realtors. More importantly to them, they have teamed up and used their business, Coffey Compass Group, as a way to grow their family and give back to the community.
“It wasn’t this huge plan to become what we did,” Mark said.

“It was a dedication to our clients, caring about our clients, understanding that they are more important to us than any other part of the transaction. The client matters more than the numbers do. I think that we treat our agents the same way. They matter more to us than anything else. That is how we have grown.”

Patsy entered into real estate more than 25 years ago, encouraged to do so by her husband, Mark Sr. Her first year, she was named 1996 Rookie of the Year for Better Homes and Gardens, was third in sales for rookies nationally, was inducted into the President’s Hall of Fame – among several other awards.

She tried to encourage her son Mark to get into real estate for a long time. Mark was part of a union working in construction and said he enjoyed the work and the job stability. After he suffered a severe injury resulting in many knee surgeries, he realized he could not return to that career field. Real estate seemed like a natural progression. His wife, Rebecca, has had her real estate license for 20 years and has worked for Patsy since 2005. She currently serves as marketing coordinator. Mark earned his real estate license six years ago with a desire to do it on his own and work for himself.

“I wasn’t Rookie of the Year, but I sold 40 properties my rookie year,” Mark said. In his second year, Patsy approached him with a business proposition. “She asked me again about working with her, but this time forming a team instead of going to work for her,” Mark said. “I thought about it for about two-and-a-half seconds and we were off and running.”

Patsy and Mark switched from Carpenter Realtors to Keller Williams Indy Metro South just over a year ago. They remodeled and moved into their new building at 340 E. High Street in Mooresville within a five-week time period.

“For us to make that move away from Carpenter Realtors was a real struggle,” Mark said. “In this business, I think people leave for money a lot, but for us it was family motivated. The owners of Keller Williams Indy Metro South are phenomenal people that have supported us every step of the way. They will just step in and help. The moment we sat down with them, we felt at peace with them. That was huge for us.”

Family is what Coffey Compass Group is all about. “I tell the people who come to work for us that they’re joining our family whether they like it or not,” Mark said. “That is the kind of environment we want. People want to be here. With the bad that comes with family, there’s also a lot of love, dedication and support that comes with being part of a family. Everyone in here knows my kids on a first-name basis. They talk to them about their sports. Even my kids are part of this team, if you will.”