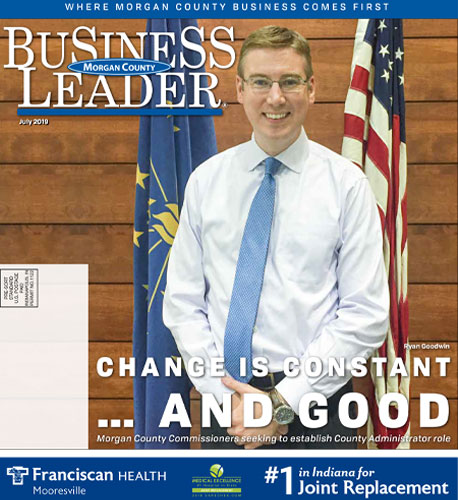 It is Ben Franklin who is credited with saying, “… in this world nothing can be said to be certain, except death and taxes.” While some support that position, others, including Ryan Goodwin, the president of the Morgan County Commissioners, also agree with Heraclitus’s words when he said, “The only constant is change.” Goodwin sees that Morgan County is experiencing “an unleashing of change.” He thinks with responsible guidance, the momentum that is building within the county can become a great revitalization.

While he was interested in pursuing this progression of service, he says the timing was outside his control. When a commissioner decided not to run for a third term, the seat became available. “If he had not retired, I would not have run for a seat on the Commission. I would have stayed in the Council,” Goodwin said. “I loved being a Council member. But it is a reality that you have a greater opportunity to shape the future of the County as a commissioner.”

Goodwin was eager to take part in shaping the future of Morgan County. “The Council is a great place to serve prior to becoming a commissioner,” he said, “because you learn all the services provided and the costs and finances of the government, and I had a front row seat to watch the commission,” he said. “It provided a good background and makes for a good segue into the commissioner position. I felt confident and prepared to make the change. I felt it was a good step.”

Difference between County Council and Commissioners

While both bodies make up the government of the County, each has specific roles. Like the federal government, there is a separation of powers in county government, divided between commissioners and the council.

The Council is the fiscal body overseeing the budget, tax rates, salaries, and matters that are directly related to expenditures and purchases by the County.

Goodwin explains that the Commissioners form the executive and legislative branches. Their many responsibilities include handling personnel issues, vendor relationships, negotiating and executing contracts as well as passing local laws called ordinances.

The maintenance of infrastructure – roads and bridges – is the most common connection people make with the commissioners. In Morgan County there are 142 bridges and more than 700 miles of roadways to oversee and maintain. “Infrastructure is our biggest responsibility by cost,” Goodwin said.