Dental Carefor those close to home and U.S. soldiers everywhere 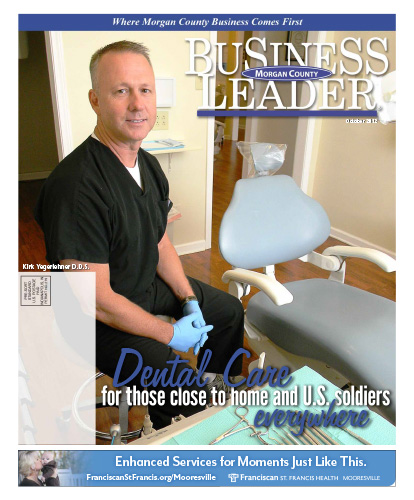 Kirk Yegerlehner grew up on the south side of Indy. With his office in Waverly at S.R. 144 and S.R. 37, you might think Kirk only moved a few miles from home. In fact, he’s been all over the world.

“I graduated from Perry Meridian High School,” Dr. Yegerlehner recalled, “and since 988 my family and I have lived on a farm a couple miles from the office — roughly six miles from where I grew up.”

Dentistry is Dr. Yegerlehner’s third career. Following high school, he earned a mechanical engineering degree from IUPUI. “I was a turbine engine mechanical engineer for Allison until 1998. I then went into commercial flying, but after 9/11, the aviation industry tightened up.”

Around the same time, Dr. Yegerlehner and his wife volunteered for mission work in Central America. “My wife’s a physician, and I worked alongside some medical-dental professionals, and I became fascinated with what I saw the dentists doing as I assisted them.” Dr. Yegerlehner explained, “There are some similarities between engineering and dentistry. We we design, for example, a prosthesis that goes into someone’s mouth, we take into account the loading of the prosthesis, what sort of materials you’re going to use, it’s not much different from building a part, or constructing a bridge, it’s just on a miniature scale. One of the classes from dental school was on materials, and it was all familiar to me.”

Dr. Yegerlehner earned his dental degree in 2007 from I.U. “I joined the army reserve as I came out of medical school,” he recalled. “There was a shortage of physicians and dentists. Not a lot of people are willing to step up, and I saw it as my way to give back.”

Dr. yegerlehner was deployed to Iraq for three months in 2008 and in to Afganistan for four months in 2010. “Dentistry is kind of the same whether you’re in a war zone or a civilian office. People have pain and they need it resolved…