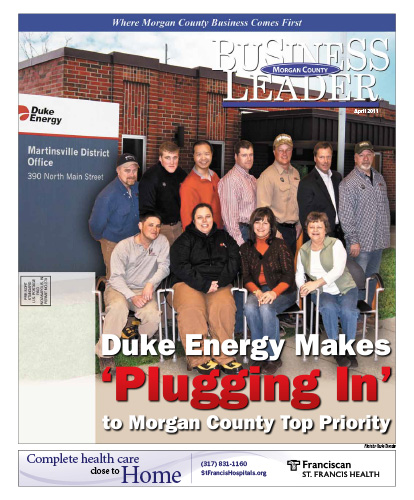 On a cold and snowy January 24, 2011, Steve Bahr of Duke Energy arrived at Martinsville City Hall to present a check to Mayor Phil Deckard for $10,000. The money was officially rewarded to the not-for-profit organization Rediscover Historic Martinsville, and earmarked to fund the installation of four power boxes and outletstrips, one at each “corner” of the city square. The outlets, once installed, will provide electricity and more convenient access to power outlets during special events downtown, most notably the Fall Foliage Festival. The power outlets should be installed in time for the upcoming Festival in October 2011. “We are thankful to Duke Energy for coming through at a time when money is hard to come by,” said Mayor Deckard during the presentation. “Duke [Energy] has helped the city in many ways through the years.”

“Duke Energy has always given back to the community,” said Steve. “Even during tough economic times, it’s a priority for us, and that’s a primary reason we set up the Duke Energy Foundation. We want to help our communities do well and grow, because that makes us all better.” As the area’s community relations and economic  director, Steve said, he has responsibilities in Morgan, Hendricks and Putnam Counties. “My job is to seek out philanthropic contributions where the company can be of service to the community.” Steve explained. “Duke Energy Foundation grants are available for any 501c3 organization, and are not restricted to energy needs. We consider: environmental benefits, health and safety concerns, and energy efficiency/education, which opens us up for us to a huge array of proposals.”