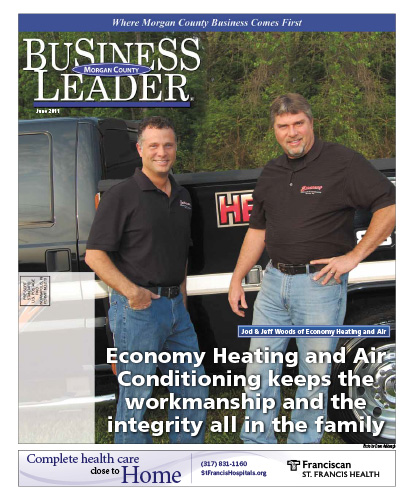 Jerry Woods started Economy Heating and Air Conditioning out of his home on the southwest side of Indy in 1976. He moved the family to Mooresville in 1980. Today, over 30 years later, Jerry’s sons Jeff and Jod have grown the family business into a second generation success story built on a foundation of quality workmanship, reliable products, and—what they value most—a reputation for dealing honestly and fairly with their customers.

According to Jeff, their father had worked in the industry four years prior to striking out on his own. “The company he worked for went out of business, and he wanted to set his own standards and represent his own work.” Jod added, “Like any other industry, you have good and bad contractors, and he wanted his work to speak for itself as honest and reputable, rather than being associated with something that may not represent what he was really about.”

Jeff and Jod assumed control of the company in 2005, they each learned under their father for years the skills as well as the ethics needed to excel as heating and air conditioning technicians.“We had a long time to learn the attention to detail that was so important to him,” said Jod. “We grew up in the business, even before we were officially of working age. If we weren’t in school, we were with Dad handing him tools.” Both Jeff and Jod admit that, because their career path had been laid out, neither ever seriously entertained doing anything else.