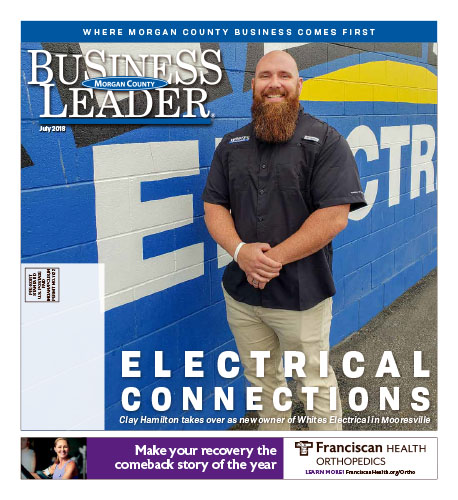 While the home he shares with wife, Terra, and their two children is elsewhere, Clay Hamilton says he spends about an equal amount of time in Mooresville, making it home, too. When you are a hands-on owner/operator of a business that is successful and growing, that’s how it is. Hamilton has no qualms about the time he devotes to Whites Electrical.

Hamilton was one of those lucky few who came out of high school with a direction. Beginning at 14-years-old, he became a staple on construction sites. During his junior and senior years of school, he participated in construction programs at Central Nine Career Center in Greenwood. The instructors were business professionals, contractors in the area, who led the construction of a home each year by students from Johnson, Morgan, and a portion of Marion Counties.

The experience helped Hamilton narrow his path. “I liked being around equipment and building things,” Hamilton said. “There’s nothing quite like standing back and saying, ‘Hey, we did that.’” When school ended each year, Hamilton continued to work for his instructors in their personal businesses.

The trades appealed to him, as Hamilton expressed, “because I like working hard and to have dirt on my hands. And the trades aren’t going anywhere. There aren’t enough tradesmen, and even fewer craftsmen out there.”