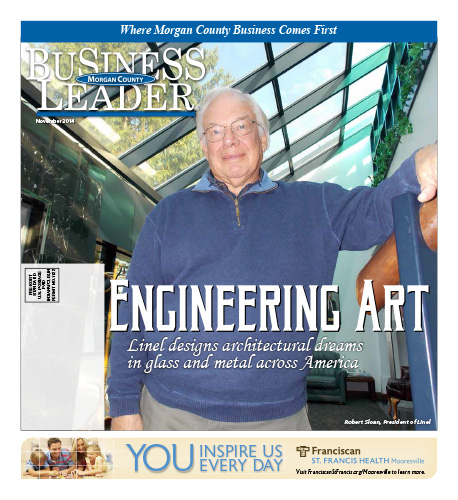 Linel designs architectural dreams in glass and metal across America

Nestled in the back of the Flagstaff Business Industrial Park across from a wide field of corn is a quiet Mooresville multimillion dollar business that touches some of the most prestigious organizations and structures in the nation. Robert Sloan and investors took ownership of the company in 1996 and he remained on as president when the company was sold to Mestek in 2012.

Sloan is originally from Massachusetts. He received a degree in mechanical engineering from the University of Massachusetts in 1965 at the height of the Vietnam War. He was drafted by the Army, but instead enlisted as an officer candidate in the Navy, achieving the rank of Lieutenant Commander and eventually teaching in the officer’s training school in Newport, R.I. After he was discharged, he took a position with IBM in Providence, R.I. as a computer salesman.

He arrived in the Indianapolis area to help his brother-in-law turn around a jewelry business and settled with his wife Lee, and two children, Robert Jr. and Elizabeth in Martinsville.

One of the jewelry business’s major clients was Zales and when Zales filed bankruptcy, Sloan sat on the Trade Creditor’s Committee. “I got a masters degree in bankruptcy law, on the job training,” Sloan said. Working with Wall Street and through the courts provided many lessons in running a business, including the need to stay calm and unflappable. He says, “If you get worked up, you can’t think straight.” And thinking straight is part of the reason, even with the losses from the bankruptcy, Sloan and his brother-in-law turned the company around and eventually took it public. The success he found in that endeavor led him to consult with other struggling businesses.

When he was asked to consult with Linel, he found something a little different. “I thought this company had a lot of potential,” Sloan said. So he and a group of prominent investors bought it. At the beginning, their work was in Indiana, Ohio and Kentucky and there were ups and downs and struggles. In little bites they moved forward and now have clients across the nation.

“We make architect’s dreams come true,” said Sloan. “(The architect) draws something and we have engineers on staff that make the drawings come to life in a way that is structurally sound and safe.” In fact, this company with just around 100 employees has built a reputation working with some of the most prestigious organizations and premier structures like the Solomon R. Guggenheim Museum in New York city, the Corcoran Gallery of Art in Washington, D.C., and, most recently, the Corning Museum in Corning, N.Y. Some examples of their work around the immediate area includes the Indianapolis Museum of Art, the Cardinal sculpture in front of the Eiteljorg Museum, the crown atop the LA Fitness buildings, Community North Hospital, Riley Children’s Hospital and the Indianapolis Marion County Public Library.

Every piece designed and manufactured by Linel is custom. Many projects include thousands of pieces that must be fit together like a puzzle with exact measurements running into thousandths of an inch. And all those pieces are fit together on site. Making certain pieces are accurate and precise, manufactured and delivered on time is a mighty task; but one that every person at Linel knows they can accomplish by working together. The pride they take in the projects they undertake is evident because photos of finished projects are everywhere, including on office doors.

“We do cool stuff,” said Sloan, “That’s why I like it.” The 73-year-old is still an entrepreneur at heart. He said, “You think bigger. Skilled people are critical. You get people you can train and everyone works as a team.” That doesn’t mean he thinks it was easy or without challenges…