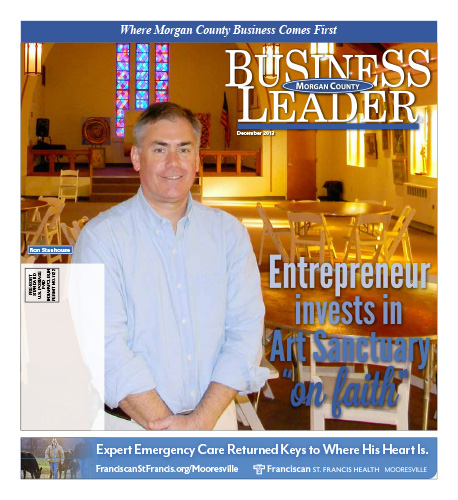 “I’m all about stimulating tourism— Cultural tourism, culinary tourism, it’s a great way to bring people to town,” observed property manager and entrepreneur Ron Stanhouse. Since opening in 2009, Ron’s renovated property in Martinsville—once a Methodist church, now the Art Sanctuary—has proven to be a cultural focal point just off the downtown square. “People will come for anything that’s unique and different, and Martinsville has a lot to offer. It’s a great way to get the revitalization process rolling.”

Ron grew up in Greenwood and Southport and attended IU Bloomington, where he obtained a degree in accounting. “Owning my own business was always the goal,” he explained. He worked for a public accounting firm in Indianapolis for a couple of years, and then returned to Bloomington to invest in the restaurant business. “A couple of college friends and I went into business and opened a restaurant.” A handful of other business ventures followed. Fast-forwarding 30 years, after several successes and an occasional misstep, Ron is now part-owner of three restaurants in Bloomington: Crazy Horse, the Alley Bar (“The smallest restaurant in Bloomington.”) and the Upstairs Pub.

“Bloomington has been a fertile environment for bars and restaurants, but people forget that, 30 years ago, it was a very different place. Bloomington had to create its own Revitalization Group (now called Downtown Bloomington Inc.) People think Bloomington was always cool and upscale and successful. It’s a process and it takes time. A lot of what we’re doing now in Martinsville is what I saw implemented back then.”

In 2005, Ron attended a conference on revitalization, and shortly after invested in a decaying building in Bloomington. “We could have turned it around for a quick profit, but we…