Focused on the Best 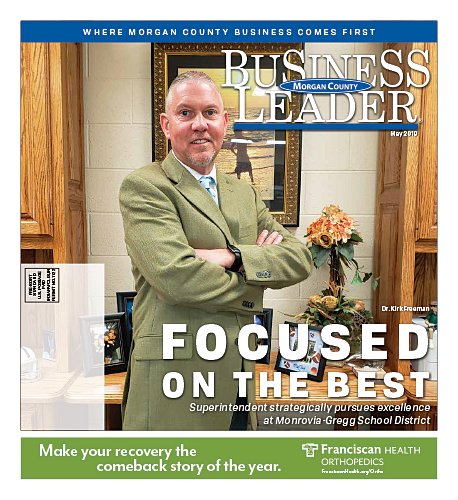 It speaks volumes for both sides that the new superintendent of the Monrovia-Gregg School District, Kirk Freeman, said he wanted to finish his career in a great school district to help them become the best of the best.

Freeman began his career at Eminence Middle/High School in Morgan County. Unlike many new teachers, he had already completed a four-year obligation in the United States Army from his college days in ROTC at Indiana State University. He served in the medical service corps, achieving the rank of Captain before being honorably discharged.

Over three years there, he coached the boy’s junior varsity basketball team and the boys and girls track team. While there, he returned to Indiana State for a master’s degree and to get the principal licensure. In his last year at Eminence, he was the principal.

He spent a year at Linton-Stockton High School in Green County, Ind. and then nine years in Clay County. He was principal at Northview High School in Brazil and at Van Buren Elementary in Clay City. In 1994, he completed a doctorate degree at the Terre Haute campus of Indiana State.

After achieving the PhD, Freeman began his own education consulting company, Kirk Freeman Consulting. He did this not because he didn’t want to be in one school district, but because he wanted to influence more than one district. “Society had changed so much that teacher’s plates were being expanded,” Freeman said. “There has been more brain research in the last years and education has become more than theory. We now know how the brain works and accepts information. I wanted to share with teachers how to teach for better learning and I also thought it was important to ask what we can take off teacher’s plates as we are adding on more.”

Unlike many consultants, Freeman felt it was important not only to go into a corporation and give information to help them improve, but then coach teachers through implementation. In addition to teaching teachers across the nation how to educate children today so they learn better, he also provided direction on leadership and curriculum.

“I enjoyed doing what I was doing,” Freeman said. “I have been fortunate to have been a building administrator at all three levels and to have consulted schools. I have a breadth of experience to draw from. If I don’t know the answer, I have resources from which to pull.” He said he wanted to take all he had learned and apply it all into one district. He wanted to make jobs more productive, make work easier and more effective.

Selecting one of the best

He took his time looking for the district he wanted to join. “I wanted a growing system. One with a good solid foundation of family values. Monrovia-Gregg really jumped out. It had a really good reputation. It served a growing community with high moral values.”

Read the Full May 2019 Edition Here