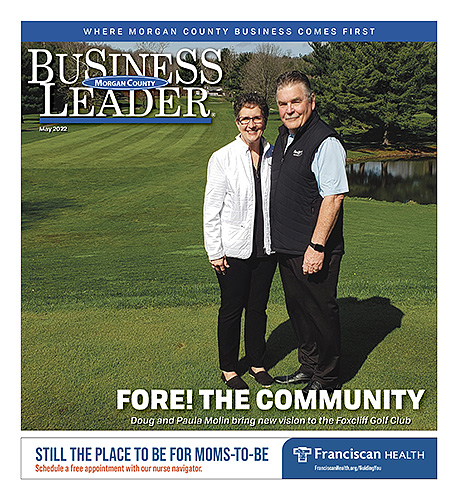 Doug and Paula Molin love Martinsville and Morgan County. They have lived in Martinsville for more than 30 years. Their eight children have grown up, gone to school, and built happy, successful lives from this Martinsville foundation.

Their Martinsville foundation included many hours at the Foxcliff Golf Club where their children learned to play the game. The couple lovingly calls them “cart kids” because they worked at the golf course many summers. One of their sons proposed to his now wife on the course and one of their daughters went on to play golf on a championship team. Golf and Foxcliff play a significant role in Molin family history.

It was just about to become a place for Doug to spend more leisure time after he ‘retired’ from his role in the Artesian Group. After retiring from his role as Director for Center for Advanced Aviation System Development’s Air Traffic systems and operations he and Paula joined forces with Craig Fenneman and his wife to form the Artesian Group. The Artesian Group came about on a joint vacation during a conversation about what they could all do to benefit the community they loved.

Their goal was to bring about a significant restoration in downtown Martinsville. They wanted residents and visitors to have a thriving gathering place. They envisioned free movie nights, a farmer’s market and more. Over three years the Group completed about 40 building and apartment renovations. They even created a business incubation space where new businesses would have a place to grow their businesses. Once all the renovations were complete and the units filled with tenants, Doug stepped away – to ‘retire’ once again.

Retirement for Doug, once again, did not include a lot of leisure time. The couple helped a daughter renovate a home, they traveled with their 20+ grandchildren, and participated in the civic life of Martinsville – including being a board member at the Foxcliff Golf Club. Paula was excited that Doug would have time to golf again. “He is the golfer,” she said. “I try.” However, that was not in the cards.

Read the Full May 2022 Edition Here