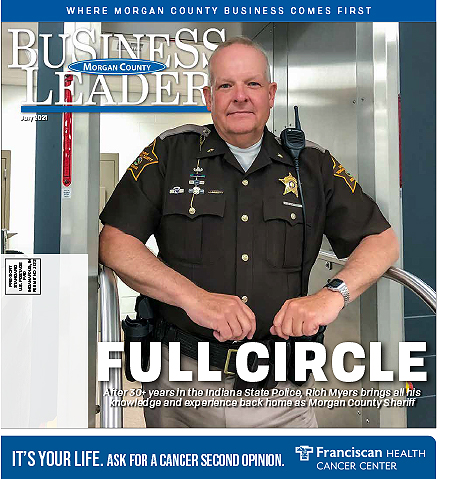 One thing is for certain, you never know when you will meet someone who will change your life. That person for Rich Myers was a good friend of his father who would come by their Eminence home to visit. His name was Rod Katter.

Katter was a policeman. Myers said, “I knew him, saw him, and saw what he represented: law and order.” He would show up in his crisp, sharp uniform and washed car, and young Myers saw what he wanted to be when he grew up – a policeman.

Many youngsters think they want to be a fireman, a policeman, or Superman at some point but as they get older, the vision they hold of the future changes. Not so for Myers. When he graduated from high school, he still wanted to be a policeman. Candidates had to be 21 years old to attend the police academy. At 18 he joined the Indiana State Police as a civilian employee.

Myers spent three years traveling across the state with an older group of men on what was called the Tower Crew. While hanging communications devices, dishes, and antennas for the state police he learned about time management, work ethic, and persistence. He also learned how to accept disappointment when he was not accepted into the Indiana State Police Academy on his first attempt. “At the time there would something like 30 openings,” Myers said, “and more than 3,000 applicants. It was really tough to get in.”

The next year he was accepted into the Academy. While there, he was asked for a “wish list” of where he wanted to be based after graduation. He wanted to be in the Putnamville District which, at the time, included Morgan County and his hometown. He also asked to be considered for the Jasper or Bloomington District. He was sent to the Lafayette District. “It was not what I wanted,” Myers said, “but it was the best thing for me. I made all my rookie mistakes there over two of the greatest years in my law enforcement career.”

After two years he got his wish and was transferred to Putnamville where he spent the next 15 years working the road. His duties included everything from calls for service to traffic enforcement and criminal enforcement. Troopers were offered the chance to pursue specialties such as SCUBA, SWAT, drugs, undercover, stolen vehicles, or investigations.

When Explosive Ordinance Disposal (EOD) commonly called the “Bomb Squad,” was started, Myers applied and was accepted. There were only a few troopers in the program across the state and it was on a part-time, as-needed basis. “It was totally volunteer,” Myers said. “There was no extra pay, just a chance to pursue an interest.”

In the EOD his primary responsibility was to be the eyes and ears for law enforcement, to ascertain the validity of a threat, call for assistance from other agencies if needed, and be part of the resolution. There was an extensive 6-week training course in Alabama with the military and FBI, and troopers were provided basic used equipment and even made some of their own.

Since that time, the program has evolved into a full-time team. Many of the specialties worked together. During the period when meth labs were prevalent and there was a strong potential for explosions, the drug and the EOD teams combined efforts. He was involved with the attempted bombing of the Tippecanoe Courthouse in 1998 from which he was awarded a Silver Star.

BUILDING FOR THE FUTURE

The desire to learn and develop new knowledge and skills led Myers to take a position as the Public Information Officer (PIO). He was promoted to sergeant and was responsible for interacting with media, conducting community programs, and school and public relations. When the districts were redrawn, Myers transferred to the Indianapolis post. Myers said he went from busy to busy-busy.