Get PHAT at Macs of Martinsville 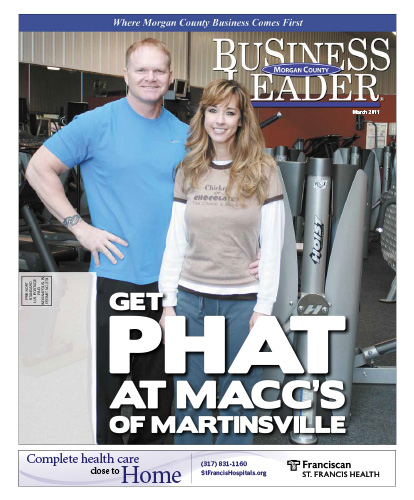 Angie McGregor doesn’t have to think hard to recall the toughest challenge she and husband Marvin faced as new business owners pursuing their dream to open a fitness center. “The [June] 2008 flood hit the building —only two weeks before our planned grand opening! The storm shattered the front windows, and the building filled with water.” Angie recalls shedding many tears that day when they discovered the facility knee-deep with floodwater. “That was a drastic thing to have happen at any point, let alone when your future is wrapped up in the initial investment. We couldn’t see it at the time, but we were lucky in many respects. Most of our heavy equipment hadn’t arrived yet. In fact, just a couple days before, we had concerns because the equipment had been delayed in shipping, and it turned out to be a lucky break. Much of the floor was empty. And as a result of water discoloration, we installed carpet, which adds to the aesthetic and sound-dampening of the facility.”

She also credits their landlord for working alongside them in the days after the flood to replace their sinks, dry out the space and help restore the facility. The flood set the opening of Phat Macc’s Fitness back to September 2008. Marvin Macgregor, who had worked with Chrysler since 1996, accepted a buyout settlement when their Illinois plant shut down.