Have a Drink at the Creek 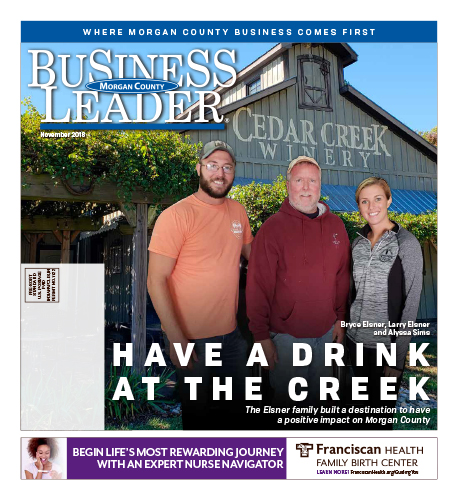 Talk with Larry Elsner about business or life and he is quick to say that he does not really make plans. In the next breath he is saying he is a workaholic who must always be doing something, and he says his wife Donell would confirm that. Take a walk around the lovely grounds on the outskirts of Martinsville that are home to Cedar Creek Winery, Cedar Creek Brew Co. and Cedar Creek Distillery and you will see the results of a family doing something.

Larry’s son, Bryce, quickly qualifies his father’s statement about always staying busy. “He does everything to the best of his capabilities,” Bryce said.

Larry, son Bryce, and daughter Alyssa Sims work together to operate the special attraction referred to as Drink at the Creek, with each one owning their own business that contributes to the whole.

Larry started it off when he purchased 25 acres to build the Cedar Creek Winery. The general construction contractor’s basement hobby had outgrown the basement of his home in Wilbur and he needed room to expand. He started talking with farmers inquiring about purchasing land.

The timing was relevant as the recession had hit the housing industry hard and after years as a carpenter, Larry’s body was telling him it was time to hang up the hammer. Not able to sit and do nothing, he saw the winery as a new business venture.

Originally, making wine was a pleasant diversion. “I enjoyed doing something different,” Larry said. “We were making wine and giving it away to family and friends, and drinking some, too.” Winemaking as a hobby is for home use only, restricted by law and production is limited by law.

But as a business, Larry started with a sketch of a building where he could make wine and have a tasting room telling his son Bryce saying he wanted to build it somewhere. Bryce was then working for a landscaping business and when it was time to start construction on their land, Bryce stepped up to help his dad bring the sketch into reality.

At the same time, Bryce left his job to join his father at the winery. He got involved with pulling permits required to meet federal and state regulations, so they could produce wine commercially. While Larry worked on making wine and maintaining the property, Bryce was an employee that helped with advertising, managing the tasting room, and running the backside of the business. The whole family pitched in to bottle and label the wine.