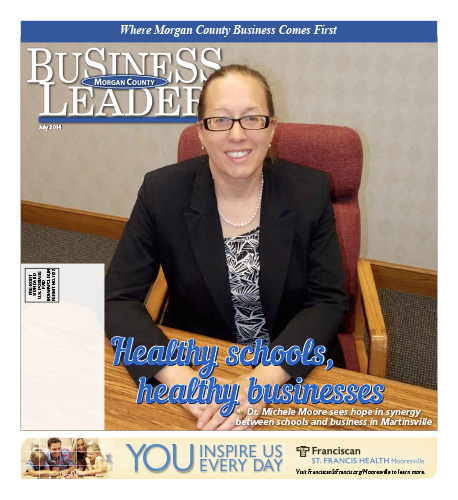 Dr. Michele Moore sees hope in synergy between school and business in Martinsville

If you walk into the office of the new superintendent of the Metropolitan School District of Martinsville, you will notice that there is no chair behind the desk. Dr. Michele Moore is not much for sitting. She stands to work at an elevated computer station and uses her desk top to neatly organize work in progress. And she is primed to take a stand for Martinsville’s schools. “We need to change the story that people say about (the district),” Moore said. “We are in charge of the message and the story is that this is a great school district. We have key programs centered on academic excellence and that is part of the vision we have to share.” She is quick to recite some of the achievements and honors for the schools:

The academic excellence has been an orchestrated focus and she feels several of the schools, from elementary to high shcoo, are what she call “hotbeds of academic rigor. “However,” she said, “Not every child wants to attend college. One area I want to focus on is really creating authentic college and career standards.”

That means enhancing votational elements of the curriculum. She says there are high tech and well-paying jobs that cannot currently be filled in the country and it is time to change that. She cited research that determined people who do not have post-secondary training have the highest unemployment rates. The critical solution, she says, is starting kids on their career path in high school, whether they’re a college bound with AP classes and dual credits or on a vocational track that can result in an Associate’s degree, or certificate.

Her vision is to begin in industrial vocational committee to target key areas where training need to be enhanced or developed. She welcomes feedback and information from the local business community to determine their needs and then establish what training is necessary to meet those needs. The concept is for development of vocational programs to be directed by the community job needs through a public/private partnership where the schools and business leaders work together.