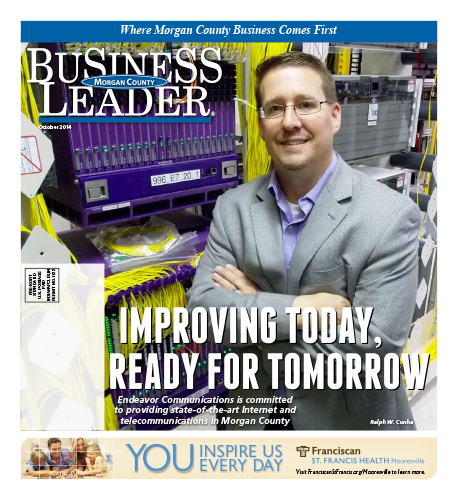 Today one of the first questions from a prospective business considering a move to Morgan County is about the technology infrastructure that would be available to them at the location they are considering. There has been a need for state-of-the-art Internet and telecommunications in Morgan County. That is not an issue for Monrovia, at least not the exchange area served by Endeavor Communications in Monrovia.

Endeavor Communications is a telecommunications cooperative. It is owned completely by its members and currently covers nine different exchanges in eight Indiana counties. More than 25 percent of its members are located in Morgan County.

Ralph Cunha, originally from the east coast, joined Endeavor Communications in 2004 as controller. The CPA came from a firm that specialized in rural telephone companies. So the transition was a natural one for him. In 2007 he was named CFO and in 2010 he became president and CEO of the company. It is clear the fit between the man and the organization is like cookies and milk, they go together.

Cunha explained that the co-op was incorporated in 1950 in Poland, Ind. as the Clay County Rural Telephone, Inc. Cedric Ray led the group of citizens that came together to bring voice (telephone) service to rural areas. The farmers needed communication tools, so they pulled together a network.

The co-op developed and grew. At the time of the AT&T divestiture, carriers signed off and decided eligible telecommunications “carriers of last resort” for each exchange. Exchanges are defined not by county or specifically by town. An exchange includes all the users with a specific prefix in their phone number. That’s why Endeavor Communications provides services to only portions of Morgan County. But within their assigned exchange areas, the company is required to make service available to every user.

A past history of firsts and milestones

Beginning as a member-centric organization in 1950, that same focus has remained intact throughout its history. The cooperative began expanding by acquiring other exchange areas
through the purchase of small, local telephone companies and bringing new technology to its members.

In 1962 the co-op became one of the first companies in Indiana to provide push-button mobile telephone service that did not require the use of an operator.

In 1966 the Coatesville exchange became the first 100 percent private line exchange in Indiana.

In 2005 Endeavor began the fiber-to-the-premises project.

Most recent new technology and services

The purpose of the fiber-to-the-premises project is to upgrade old technology, copper wiring, to newer, faster and more scalable technology through fiber optics. The project is in the final stages and all upgrades to the Endeavor Communications service areas will be completed in 2015.

That means both residential and business members of the cooperative will enjoy exceptionally faster and better television, voice and Internet services including download speeds up to 50 Mbps.

In fact, in line with the commitment to their members, the services are the top of the line of the best currently available. And what’s more, the new fiber optics can handle higher speeds in the future and additional services.

“Today we are able to provide residents with services they have never had before,” said Cunha. ”We are the leader of technology in the communities we serve. We provide infrastructure upon which the community is built.”

Endeavor Communications provides the wires to homes, business and municipal organizations. A router may be used for wireless service inside. “The two are complementary to one another,” Cunha explained, “not a substitute switch between wired and WIFI or wireless. Keeping connected with wireless needs wires.

“In our territory we actually have fiber going to towers,” Cunha noted. This infrastructure is available to others like mobile phone carriers that use the towers and lines for service to their customers.