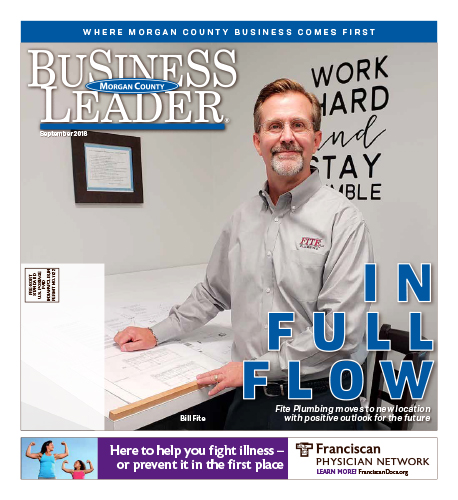 Fite’s grandfather had operated a plumbing business for many years on the west side of Indianapolis. Several other Fite family members worked in the business. As a boy, Bill would be in and out of the plumbing supply barn next door. “We would build forts and there were always plumbing pipes in them, as grab bars or weapons, not for running water. I would ride the back hoe with him, too.” When Fite was in junior high school, his grandfather died, and the business was dissolved.

Over summer breaks in high school, Fite worked in a local plumbing business and after graduating, he worked there to pay for college. He says that he really enjoyed construction plumbing and always figured he would eventually be a builder in some way.

He said, “Plumbing got into my blood when I was young.” Meaning that after a couple of years of taking electronics classes in night school, he chose to pass on the electronics career and go into plumbing full-time. The company where he worked had an inside school and that was considered his apprenticeship program. In 1984 he received his journeyman’s license as a plumber. His education there was not limited to plumbing. “They were considered topnotch and that fit right in with what I wanted to do, which was work at the highest level. They emphasized that to me over and over and I never forgot it.”

Fite spent almost eight years learning there before the business shut down. He took a job as a sprinkler fitter. “I can do it, but it wasn’t my calling,” Fite said. “Some people have jobs and some people have careers doing what they love to do. I like plumbing and I have made a career in it.”

Not just a career, Fite said he felt called to follow in his grandfather’s steps and open his own version of Fite Plumbing. His wife since 1985, Lisa, supported his decision and even with their first child on the way, he stepped out on his own. “I was both exhilarated and terrified,” Fite said, “but with my faith and family in full support, that made it feasible in my mind and heart.

“You can be successful if you put it in your mind and you have people motivating you,” Fite said. “I believe if you keep positive, work hard, and stay humble, you will be successful.”

Setting up shop and getting to work

Working out of his Monrovia home, Fite says he did not make a large capital investment. Initially, all the money he made was reinvested into the business. “I didn’t borrow from the bank. It was my income that was used to build the company; paying for equipment and other assets. It was a family decision, and an investment in our future.”

Business boomed. He learned quickly that growing too fast can be a major hiccup in a new business. “We backed down a little bit and then gradually built over the next five or six years. It was a combination of the school of hard knocks, going to conferences, and learning from others in business that taught me it doesn’t work for a business owner to do everything himself.” He says he learned that doing the work and running management and operations often means there isn’t much managing being done.