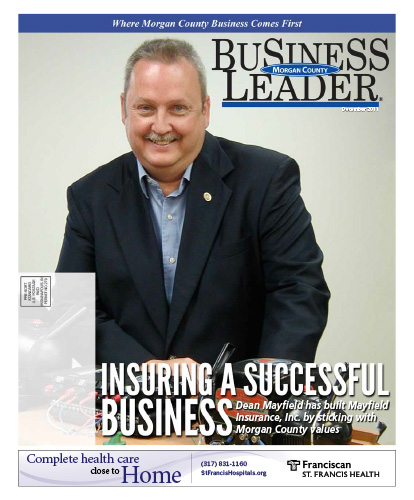 Right on Dean Mayfield’s business card, it says, “Mooresville’s Own” and that says a lot about how Mayfield views himself and his business, Mayfield Insurance, Inc. Other than commuting to Indianapolis for college and a couple of jobs prior to 1989, Mayfield’s entire life from before his first birthday to the present has been spent in Morgan County. He’s proud to say Morgan County has always been his home and he says, “I never really thought about going anywhere else.”

He needed a job after college and two family friends who were in the insurance business suggested he try insurance. Mayfield said he was that scout who sold the most popcorn and always thought he knew he wanted to do sales. So, he took the job. It didn’t take him long to figure out that selling small life insurance policies and collecting ten-cent-a-week premiums on debit accounts wasn’t going to pay the bills.

However, in retrospect, Mayfield says, with a chuckle, “This was going to be a part-time gig and it turned into a pretty good fulltime gig.” Insurance had caught his attention.
From the life insurance sales job he went to Mayflower and worked in claims and risk management. “They were going through a major re-structuring. I made the decision to leave,” says Mayfield, adding, “I missed the 5-year vesting mark by a month when I left in Feb. 1989.”
It was at that juncture he joined a start-up company, the Warren Insurance Agency, with the agreement that he would run the agency if he could be a partner. The company started with an existing insurance agency in Mooresville…