It Takes the Whole Community 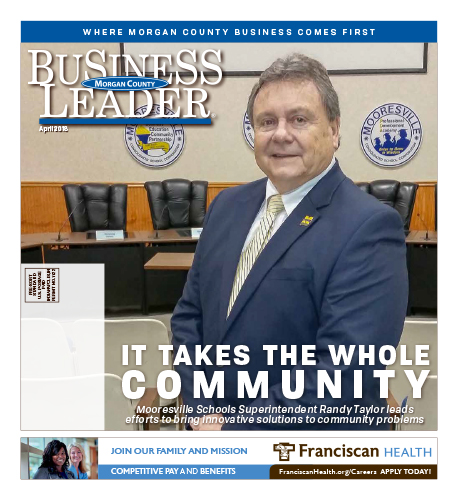 The February enrollment figures for Mooresville Consolidated School Corporation made a big impression on Superintendent Randy Taylor. That’s because enrollment increased over the number of students from the beginning of the school year. Taylor said, “We have more students moving into the community. The indication is that we are being noticed and people are moving into our community seeing the strengths in academics, athletics, and performing arts.”

At the conclusion of this school year, Taylor will be celebrating 45 years in education and he is excited and enthusiastic about what is happening in the schools today and the part he wants to play in it. After 13 years as an instructor and coach in Martinsville, Taylor made the decision to become an administrator. “I felt a need to get into the side of education where decisions were being made as to what was best for students and also for the community, because they run hand-in-hand. To have a good community, you have to have a strong school system.”

In Martinsville, Taylor was an assistant principal and principal in a middle school, an assistant principal at the high school, and then the assistant superintendent for business. A Morgan County resident his entire personal and professional life, Taylor built relationships with community, business, and school leaders across the county starting with his time as a student and teacher participating in and coaching athletics. He expanded his network by participating in organizations such as the South Central Indiana Superintendents Study Council and other collaborative gatherings like business leader’s roundtables.

Residing halfway between Martinsville and Mooresville, he has been involved in both communities for many years so when he took the position of superintendent for the Mooresville Schools, he felt the biggest difference was turning right out of his neighborhood instead of turning left to go to work.

“I am a huge believer in team,” Taylor said. “Everybody is important and has a job to do.” He says that sometimes it is just as important to be a good follower as a leader and realize that everyone has a role to play and should as-pire to be the best in that role.

Since he took the helm on July 1, 2017, the district has finished a $20 million renovation project and took on another $4 million project that touched each building in the district. Improvements include work on the high school auditorium, re-bricking of the middle school, rebuilding football, baseball, and softball fields, and improving the drainage in the Indiana/Carlisle Streets area. All improvements were made without raising taxes.
In addition to the successful Interdisciplinary Cooperative Education (ICE) and Work Based Learning (WBL) programs, a new vocational agricultural program has been started in partnership with Dow AgroSciences, and a building trades program that is currently working on a project for the boys and girls track locker rooms and a baseball field at Newby Elementary School.