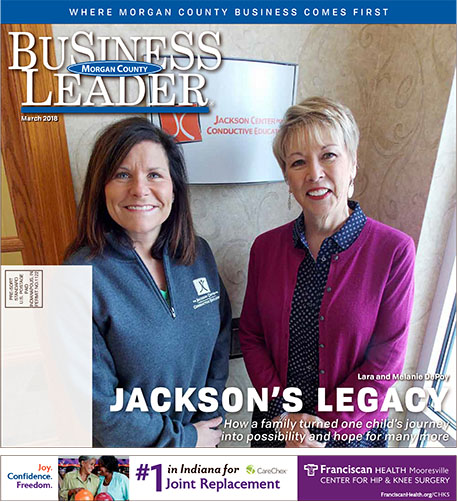 Every parent dreams of a life filled with potential and purpose for their children. That desire is no different for parents of children diagnosed with cerebral palsy (CP) and thanks to the Jackson Center in Mooresville, the potential for those with CP is brighter. Jackson Center is one of a handful of Conductive Education centers in the nation; started and operated as a 501c3 non-profit organization by the DePoy family in Mooresville.

In January 2001, Lara and Spencer DePoy welcomed their first child, Jackson, into the world. Lara had just finished a Master’s degree at University of Indianapolis in occupational therapy and was set to begin a new job. The joy of new beginnings and life was quickly replaced with concern and fear as Jackson struggled to live. Within six months, Jackson became one of the 2.5 children in every thousand live births diagnosed with CP, which is a broad diagnosis for brain damage that occurs before, during, or after birth. The prognosis for people diagnosed with CP, according to Lara, is often very cloudy and uncertain. The DePoys, like other families in the same situation, were thrown into an uncertain world with lots of unknowns and little information, support, and most of all, hope. Read the Full March 2018 Edition Here