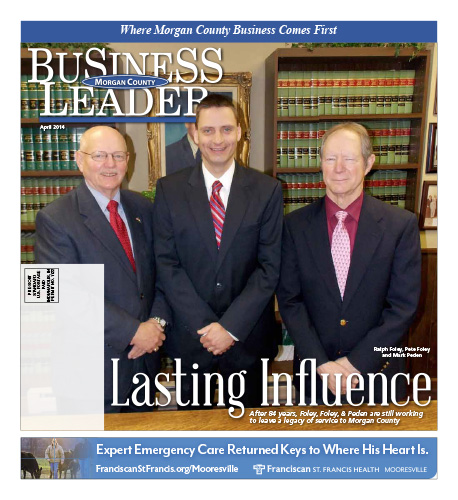 After 84 years, Foley, Foley, & Peden are still working to leave a legacy of service to Morgan County History speaks to Pete Foley. He says growing up every vacation had some historical stop along the way and those experiences were not lost on him. “I always had an appreciation of how lawyers played a role within the events of history, especially American history,” Pete said. “A lot of the founding fathers were lawyers. I always had a sense that even if I didn’t practice law, having that degree and knowledge would provide opportunities to influence and help shape the community and benefit people.”

The decision to pursue a law degree wasn’t made until he was a junior at Indiana University Bloomington where he was studying for a double major in history and criminal justice. He went to the IU School of Law Indianapolis and graduated in 1997.

The law firm in Martinsville that Pete joined in 1999 had been established by his grandfather, Charles H. Foley, in 1930. Pete’s father, Ralph M. Foley joined in 1965. Mark Peden joined in January, 1973. Pete shared memories growing up among the attorneys’ law library with two older brothers, David and Brian, who would shut him in the vault in the basement of the building that was originally a bank. He concedes he probably shut them in there, too, but more vividly remembers being the victim of the prank.

There is pride in his voice when he talks about the continuous service Foley, Foley & Peden has provided to the community for 84 years. It is definitely a family business and no one appreciates that more than Pete. His father, Ralph has spent his entire career there, as has Pete. And the decision made in his junior year at IU was partly because it was the family business.

“I saw my father’s career as a child and the family life he had,” said Pete. “He was able to stay in the community and be active in the community.” Again, that lesson from history has not been lost on Pete. He and his wife, Jill, have made Martinsville home for their family. “We are rearing our daughters, Maggie, 13, and Anna, 11, here because I have confidence in the shared values I had as a child and they would have as well; friends, neighbors, church, schools, I think we have shared values that are important and are the right values.

One of the values Pete prizes is being purposeful. The last two years Pete has run a marathon each year. He says, “You can’t be lackadaisical about that. You have to be purposeful. Twenty mile training runs by yourself are challenging. I think it’s good for people to be challenged both at work and in life outside their work. It’s a beneficial life lesson, in fact, it can be life shaping.”