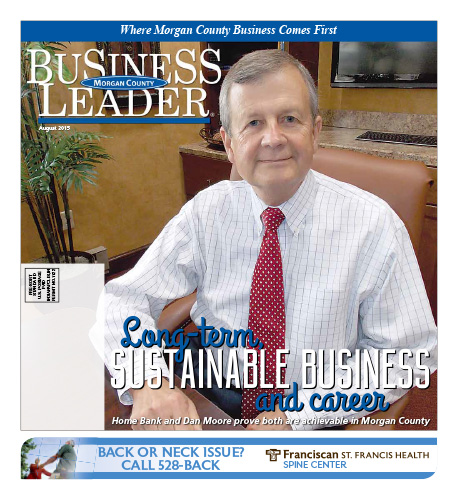 Aspirations are powerful, especially when they are long-term and sustainable. A prime example is Home Bank, headquartered in Martinsville. The original business was called the Martinsville Building Loan Fund & Savings Association, which opened its doors on July 2, 1885. The mission of the company was to provide a place for people to save their money, then pool it together to make loans to people and businesses to fulfill their dreams. All of the money stayed within the community. While the mis- sion remained steadfast, the business grew rapidly, evolved and was reorganized. On February 21, 1890, the doors opened as Home Building Association. The bank later changed its name in 1990 to Home Bank, just in time to celebrate its 100-year anniversary.

This year Home Bank celebrates 125 years in operation ‒ not with another name change, but with a continued commitment to the original mission … with a bit of a twist.

Dan Moore is president and CEO of Home Bank. His professional path has echoed the power of aspirations through his own long and productive career in banking. When Moore graduated from Indiana State University as a young groom, he need- ed a job – any job. Times were tough in the employment market, and he felt good snagging a loan officer’s position at Railroadmen’s Federal Savings and Loan Association of Indianapolis. “I was just looking for a job,” Moore says. “I was intrigued by the commercials on TV, but didn’t know what it was.” He continues: “It was a natural fit, a great combination of us- ing people skills and a quantitative, analytical numbers piece.” He aspired to higher positions and, in the setting of a community banking environment, he became involved in every aspect as a manager. With that experience, coupled with family aspirations of raising his baby daughter Amber in a small town, he and his wife Judy made the decision to move to Martinsville, with Moore accepting a position at Home Bank. That was 38 years ago, and both Martinsville and Home Bank have been Moore’s home ever since.

“I just love every minute of it,” Moore says about banking. He admits that he did aspire to the position of president/CEO. “I didn’t know what it was, but I always wanted to go to the next level. In community banking, if you work hard, there are opportunities that open up.”

Professional advancement was one target, but there was something else that he discovered. “A community bank focuses on not just the day-to-day operations of the bank,” Moore explains, “but on how it can provide leadership to the community. Home Bank Community bankers have a role in setting the tone, the vision and the leadership of communities. They have a seat at the table.” That leadership role and “seat at the table” has taken form for Home Bank – and for Moore.