Make a Difference Today and for Tomorrow 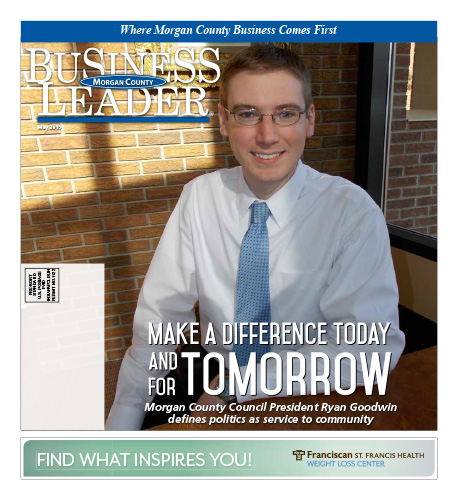 Mention politics in just about any circle and you will get lots of rolling eyes, sighs and comments of disgust. The one exception I have found is in a conversation with Ryan Goodwin.

He says, “It matters. It matters so much.” Goodwin calls Mooresville and Morgan County home. He and wife, Daphne, grew up in the area and have made it home for their two young boys, Luke, 3 and Brayden, 2. And,  both have a commitment to the community. Daphne teaches math at the Mooresville High School, and Ryan is entrenched in serving the community through politics and civic participation. Politics, to him, is not a nasty word. It’s an important and worthy cause.

Goodwin didn’t aspire to politics and point his life in that direction. He took a somewhat circuitous path to where he is today.

After high school graduation, Goodwin began college – and stayed only one term. “Being stuck in a class was frustrating,” he said. He questioned whether the instructors were teaching from experience, and that’s what he wanted, experience.

He said, “I wanted to be out in the community.” So with no background in it, he launched the quarterly full-color, glossy, 50-page Mooresville Magazine, which later evolved into the Morgan County Magazine. “I felt like a lot of people feel today, that newspapers, though wellintentioned, gravitate to the negative. The magazine highlighted positives in the community; community residents, schools and businesses.

“We were really successful with it from 2005 to 2009. I felt entrepreneurs and small businesses needed to be highlighted. But when the recession hit, large advertisers with big budgetscut back, small businesses were closing and the advertiser support just fell away.

“The theme we heard over and over again,” said Goodwin, “was that people were excited to see photos or articles about family and friends. The magazine was laid out on their coffee tables and it was good to hear good news.”

The Morgan County Magazine meant a great deal to residents and to Goodwin, but it had served the purpose of getting Goodwin more attuned to the community and how it works. “That was my first real concentrated effort in being active and involved in the community,” said Goodwin. “The publication gave me a growing awareness of issues and how
government and community work together.”