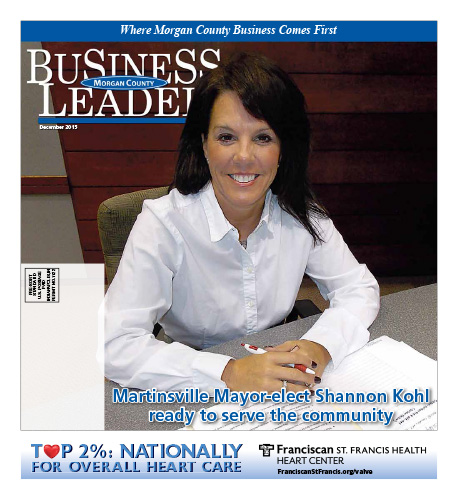 When your maiden name is Orr and you live in Indiana, it seems like maybe you’re destined to serve in a politicial office. Although incoming Martinsville Mayor Shannon Kohl says she’s not closely related to former Indiana Governor Robert D. Orr, she does remember being captivated by the TV commericals the governor ran.

From a young age, Kohl has always been interested in politics. She has been a Republican for as long as she can remember. Besides Governor Orr, another person who inspired Kohl’s interest in politics was President Ronald Regan.

When Kohl was 12-years-old, she remember watching Reagan’s first inauguration in 1981. At that time, she was attending Tabernacle Christian School; and the students were allowed to watch the inauguration on TV during their lunch break. “So I went to watch it,” she says. “One of my friends was like, ‘Come on, let’s gp.’ and I said, ‘No, I’m going to watch this.’ I was fascinated. Even though I was 12-years-old, I thought Reagan was the greatest. he made me feel hopeful. It made me proud to be an American.”

Kohl is also proud to be a Martinsville resident for 36 years. In 1978, her family moved to Martinsville where she attended Central Elementary School during second grade. the following school year, she transferred to Tabernacle Christian School, which she attended for the rest of her elementary and middle school years. During high school, Kohl attended Martinsville High School during her freshman and sophomore years and Tabernacle Christin School for her last two years.

Following graduation, Kohl went to work at farm Bureau Insurance for two years. In 1989, she and her husband Brian, whom she met at Martinsville High School, were married. They briefly lived in Indianapolis, but in 1990, they decided to move back to Martinsville to raise their children.

“We wanted to raise our three children close to our families here in Martinsville,” Kohl says. “I wanted my kids to have an upbringing like I had in a small town.”

Kohl thinks Martinsville is a great place to raise children, because it is such a close-knit community. “I think one good thing about living in a community like this is, a lot of people are there for each other,” she says. “If you need anything, the connections are much stronger and personable that you almost feel like everyone is family. I think that’s what is so unique about Morgan County and Martinsville.”

In 2000, she started selling real estate – first for Wayne Ready Realty and later for Keller Williams.

“Wayne was a very good mentor,” Kohl says. “He is really well respected. And he was so full of knowledge about Martinsville. I learned a lot more about the community through Wayne, because he was so connected with the county.”

During her years as a Realtor, Kohl also worked for the Martinsville School Corporation as a teacher’s aide and a manager in the high school book store. Additionally, she was very involved in the community, too. She was a court-appointed special advocate for children (CASA). She served on the board of Habitat for Humanity. She was a fitness instructor at the YMCA for five years. She also was a member of the MIBOR Realtor Association. And she was a member of the Methodist Church. Furthermore, her children were “active in everything,” which meant Kohl was also active in those same things.

Around 2008, Kohl began her political career when she became a Republican Precinct Committeeman. But by 2012, she had decided she wanted to be more involved in Martinsville’s government.

“I started getting interested in wanting to serve my community more,” she says. “I wanted to make a difference. [When City Councilman Doug Arthur resigned,] I decided I really wanted to step in and take that opportunity. I was always so involved in the community that this was a way for me to go further – to be more involved.”

“What I am really proud of is being able to identify to the Council that we needed to do things differently with our finances. I’m proud I helped to get the budget back in shape,” she says. “Also I’m really gratified by the accomplishments of the boards I have served on. I’ve been a City Council representative for the Indiana Association of Towns and Cities. I’ve been really involved in the Morgan County Economic Development Corporation.