MORE THAN MEETS THE EYE 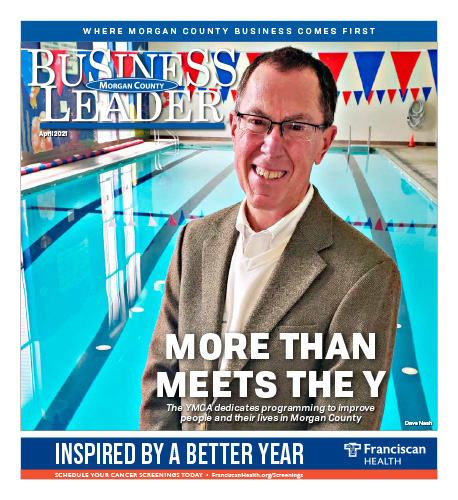 Dave Nash graduated from Ball State with a marketing degree. He joined the media industry in newspaper advertising. “I enjoyed that work,” he said. “It was a way to help businesses in the community meet their goals.

“When I was working at my first newspaper in Elkhart Indiana, there was an opening at the local Y for a sports director,” said Nash. “It paid so little that I didn’t feel I could do that.” But he views that opportunity a little differently now, as the CEO for the Barbara B. Jordan YMCA he said, “This is my passion. This is what I was born to do.”

It was actually his career in newspaper advertising and marketing that brought Dave Nash to Morgan County in 2001. When that job was gone, he decided he didn’t want to move with the newspaper business anymore. The natural beauty in the area, close proximity to large cities like Indianapolis and Bloomington, and the plethora of interstates allowing for visits to family and friends elsewhere captured his attention. He liked Martinsville and all the people he had met. A widower, he thought it would be a good place for his daughter, Kelly, to grow up, so he sought other work.

He answered an ad for the Indiana Blood Center. He got the job and that was the beginning of almost a decade of work in the non-profit sector. He found he loved working with nonprofits and expanded his involvement to become a board member for the Morgan County YMCA.

Joining the board of the YMCA seemed like a natural fit for him because he and his daughter were both involved at the YMCA. She was in the after-school program, took swimming lessons and he coached sports with a variety of her teams. He says the Y and his time there left “a soft spot in my heart.”

Nash became CEO of the YMCA in January 2016. He says activities and programs are developed at the YMCA first and foremost to strengthen the community. “We look at the needs, how we can help and who we can collaborate with in the community to fill the voids,” Nash said.

We are working to transform the way people think of the YMCA. It is much more than just a place to take swimming lessons and play basketball, although those are important and fun. It is the underlying reason for programs that makes the Barbara B. Jordan YMCA a significant organization in Morgan County.

According to Nash, the priorities of the YMCA are the most important and motivating to him: healthy living, youth development, and social responsibility.

As a runner since middle school, Nash had to learn the relationships between food, sleep, and practice which led him to pursue healthy living on his own. With Indiana rating poorly in the nation and Morgan County further below the state rating in regard to obesity, diabetes, smoking, and more, he understands the importance of promoting and educating the public in healthy living.

Programs are built on those needs in the community. A collaboration with IU Health, the MADE program explores the idea of healthy diet and the right activities for each person, youth and adult. A dietitian and a trainer from IU Health help residents learn about nutrition and expose them to different activities available at the YMCA to get 30 minutes of movement into their day. There is a menu of options that support getting active and involved at the Y.

“I would love to go out on a Sunny Saturday morning and see people running, biking, and moving about,” Nash said.

Nash would like everyone to know the YMCA is open to all Morgan County residents. Programming has been developed to bring Y-sponsored fitness events for youth and adults into the smaller Morgan County communities such as Monrovia and Eminence as well as into Mooresville. Events have been planned for the final Wednesday of each month from April until October.

“The YMCA,” Nash said, “partners with the community in youth development. We want to transform the notion that we are just babysitters.” Playing a team sport is a personal learning opportunity but is certainly not the only learning going on at the YMCA.