New Leader at the Helm 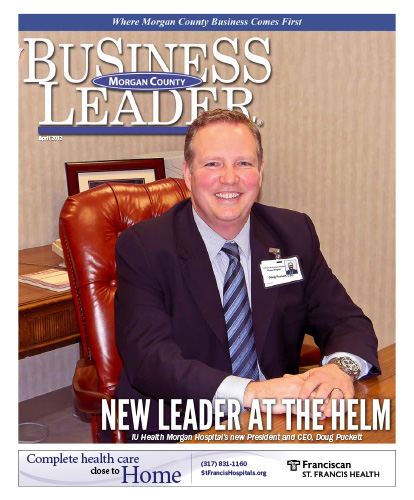 At a time when his peers were dreaming of donning the uniform of a policeman, fireman or astronaut, Doug Puckett, the new president and CEO of IU Health Morgan Hospital, had his eye on another uniform – the businessman’s suit and tie. As a boy, he liked the idea of carrying a briefcase every day.

The allure of becoming a businessman never waned and when it came time to choose a career path and college courses, he narrowed his focus. “If you look at the corporate world,“Puckett says, “the one chair that was always at the table was the finance chair. Numbers fit my personality.” So Puckett pursued the knowledge and skills to take that seat at the table by graduating from Indiana University with a degree in finance and, later, with an MBA in accounting from Butler.

Those decisions started him on the journey that has brought Puckett to IU Health Morgan Hospital. The rest of the story has to do with decisions he made to get that formal education, for that gave his knowledge and skill a purpose.

While in School, Puckett took a job working nights at St. Vincent Hospital. “They had great benefits to pay for College and I worked nights in housekeeping,” Puckett explains. The pay, the hours, the benefits; all were part of the reason he decidedto take the job.

Throughout the 13 years he worked there, starting in that first job in housekeeping and subsequently moving to the business office and then into accounting, he learned something significant to him.

“I was treated as part of the care team, so I felt as if I were part of that team to take care of those patients. It was a great development opportunity for me. It reinforced that every piece of that team is important; from those who maintain the property, to the nurses who take care of the patient, to the business people who meet with the board, and those who sweep the floor. Each piece is critical. That is part of the core of how I operate today.”