One Wipe at a Time 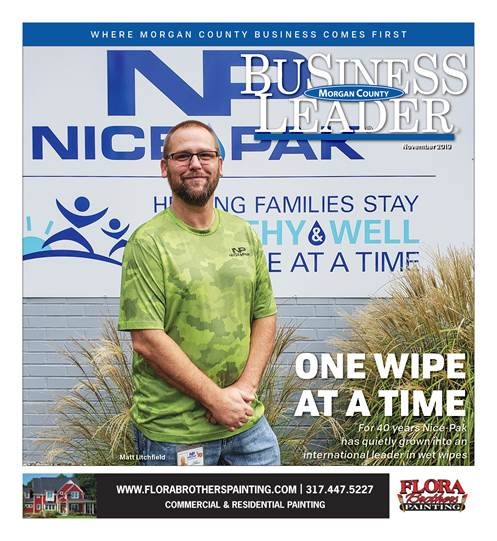 Nestled amongst the trees on top of a hill off Samuel Moore Parkway in Mooresville is a family-owned company that quietly goes about its business. Matt Litchfield is the site director overseeing the 24-hour operation manned by 375 employees that turns out more than 750 to 1,250 packs of wet wipes a minute, depending on the product. That’s more than 250 million packages of cleaning wipes coming out of the 140,000 S.F. building every year. A separate warehouse facility in the area makes certain those packages are shipped around the nation and across the globe.

The Nice-Pak building was constructed in 1974. Workers combined the cutlery and napkin in a nice, neat package for Colonel Sanders as his Kentucky Fried Chicken (KFC) business was blossoming. But packaging was not the business Nice-Pak was building.

Arthur Julius, who was in the cosmetics industry, came up with the idea for disposable wet napkins in New York in 1957. The product was innovative at the time, commonplace in many different forms now. His belief and purpose are espoused in the company purpose statement which still drives their work today: “Helping families stay healthy and well, one wipe at a time.” In the beginning Arthur Julius was making thirty pieces per minute with six people.

Arthur and his son, Robert, approached Colonel Sanders with an idea. They suggested the consumers of the “Finger Lickin’ Good” chicken would appreciate a pre-moistened wipe to clean up after the meal. Sanders liked the idea but said the packaging couldn’t be changed. If they could find room inside the package, he would agree to the suggestion. The Julius family went to work and found a way to make that happen. They combined the spoon and the fork into one implement, lovingly called the “spork.” That change meant there was room enough in the plastic package for the Wet-Nap®. KFC bought the idea and product, and the rest, as they say, is history.

However, in the case of Nice-Pak, that was really the beginning of the future. KFC was Nice-Pak’s first national customer and things started rolling from there. By the mid 1980s, the Mooresville plant added the manufacture of the disposable towelettes to include in the KFC packets.

From the beginning, Arthur Julius believed that the disposable cleaning wipes were healthier and better for people than the use of towels, water, and soap. True to their motto, Nice-Pak has pioneered many products for consumers, as well as the healthcare, food service, and other commercial industries to improve the health of people in every aspect of life. The first alcohol swab was introduced in 1963. For new mothers, the first resealable baby wipe travel packs were introduced in 1986. Disinfecting wipes came out in 1987. The antimicrobial alcohol gel hand wipe hit the market in 2003. And the first dispersible wipe made with 100 percent plant-based material was introduced in 2014.

In addition to a commitment to safety, the company continues to focus on high standards and quality products. For instance, it is understood that hand sanitizer kills the bacteria on the person spreading it on their hands, but at Nice-Pak the task is not complete without the wipe to remove the dead germs from the hands.

Nice-Pak maintains an industry leading sustainability commitment through their products, processes, and facilities. For example, the Mooresville plant is 100 percent landfill free.