Opportunity for a Lifetime 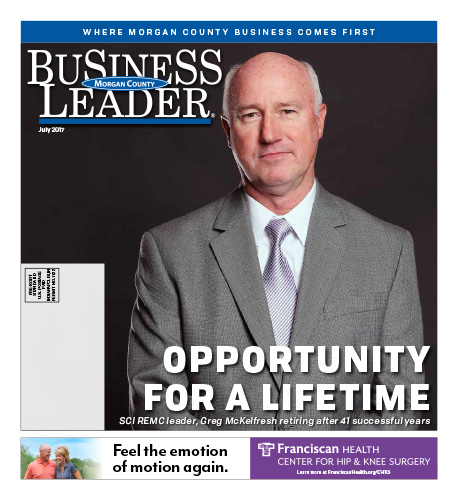 It is just a few short months until the end of the year and a new beginning for Greg McKelfresh, the current president and CEO of SCI REMC in Martinsville. Effective January 12, 2018, McKelfresh will leave the organization that he has worked in since the summers of his college years. From a part-time stint mapping utility area releases in the engineering department, over the next 40 years he worked his way up the ranks all the way up to the top position in 2013.

Although McKelfresh is not a native born resident of Mar-tinsville, his parents moved the family to the town when he was three years old. So, for him, Martinsville is home. He grew up and graduated from Martinsville High School then went on to Ball State where his interest in math led him to a degree in Actuarial Science. He didn’t have a job lined up so he enrolled in MBA studies at Indiana University in Bloomington, working part-time at Morgan County RMC.

However, at the end of the first semester when the office manager at Morgan County RMC, which later became SCI REMC, asked him if he would be interested in full-time employment, he accepted. “I was engaged. I needed a job and I was tired of school,” McKelfresh said.

His job was in data processing, the department that evolved through the years into IT. He was promoted to supervisor, hired people and began the organization’s transition into the computer age.

He says that although he wasn’t really aware, he now sees that he was probably being groomed to take over for the office manager, who had been there for a number of years and was nearing retirement. “I was in the right place at the right time,” McKelfresh said.

As office manager, he supervised all the inside personnel in departments like data processing, accounting, and personnel. “We probably had about 60 to 70 employees at the time,” he said.

It was an exciting time for Morgan County RMC, which had been established in 1939 to service primarily Morgan, Monroe, Owen, Brown and parts of Johnson, Clay, and Putnam Counties. As office manager, he was tasked with hiring management people and change was afoot. In his words, what was customer service became Member Services and in about 1997-98 they hired a CPA who took over the accounting department. Data processing morphed into IT with a greater focus on technology. That department was then lead by a VP of Business Technology. “Part of the changes were the result of the growth of RMC and another was the use of technology and how we could better serve our membership,” McKelfresh said.