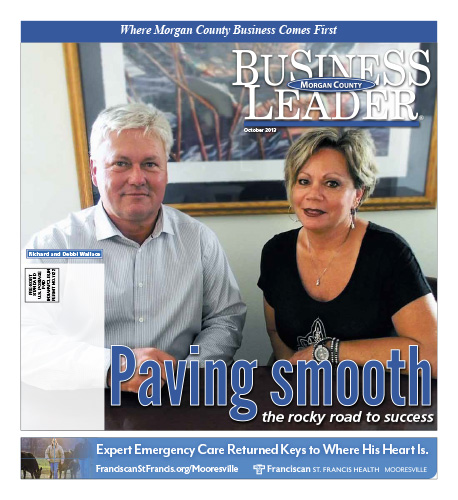 the rocky road to success

In 1972, Richard Wallace married his high school sweetheart, Debbi, and took a job in construction. That began a career in the industry for Richard, and, in 1986, following a “failure to retire,” Richard formed Wallace Construction along with Debbi and business partner Roger Huff. Over the next few years, Richard turned Wallace Construction into a successful road-building, concrete laying multi-county operation.

At the same time, Debbi Wallace raised their three children while holding down various part-time jobs, everything from retail to real estate. She attended beauty school in 1985 and opened her own business, Mane Attraction, a hair and tanning salon, in Martinsville Plaza before selling it in 1995. She experienced her own “failure to retire,” and joined the office staff of Wallace Construction in 2000, and since March 2010, she has managed the office of Richard’s sole-owned gravel-mining venture started in 1998, White River Gravel Co., Inc.

Based in Waverly, Wallace Construction services commercial, industrial, residential and municipal markets in Indianapolis and south-central Indiana. Notable projects include the Indianapolis Colts practice field, parking lots at the Indiana State Fair and the Children’s Museum of Indianapolis, plus extensive paving and repair work for the City of Martinsville, City of Mooresville, and the Morgan County Highway Department.

Richard came to Martinsville from the south side of Indianapolis at age 16. He met Debbi at Martinsville High School. Debbi remembered, “He was trying to find a classroom and I pointed him in the right direction. I fixed him up with a couple of girlfriends before we started dating.” They married in 1972.

Richard held down two jobs for a while. One was at a gas station. Debbi’s step-father, a foreman at a paving company, alsooffered Richard a job as part of his construction crew. Richard began as a laborer with the paving crew, mostly at commercial sites. Richard enjoyed working outdoors, and committed to that job full-time. He has never left the industry. He served a 6,000 hour apprenticeship with the Operating Engineers Local 103. He worked an additional three years with the apprenticeship program as a mechanic on heavy equipment. In 1976, he joined Astro Paving, overseeing their asphalt plant.

During this time, Astro Paving bought out several other small asphalt plants, and grew into a major supplier for Indianapolis. Richard oversaw all the asphalt plants and settled into management. The company was acquired in 1991 by the Heritage Group, and three years later, it became Milestone. Richard retired from the company in 1995, though in reality, he was just entering the second half of his career.