Plugged into the Community 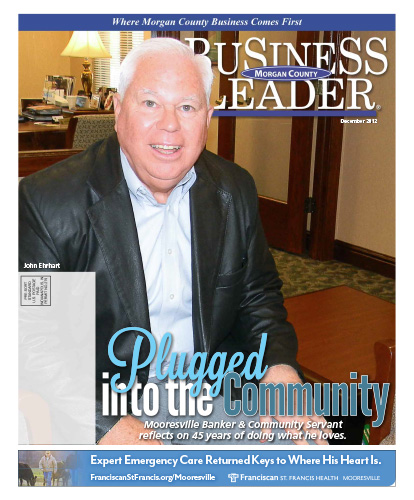 The saying goes that when you love what you do, you never go to work. John Ehrhart feels blessed that over the last several years, he had the opportunity to experience exactly that sort of job satisfaction. On the eve of his retirement, John reflected back on a distinguished career in banking that reaches back over 45 years, and looked ahead to the next chapter in his life.

“It was a tough decision, but I think it’s the right one. The bank asked me to stay on a couple more years, and I appreciated the offer. I’m now 68 years old, and my wife and I are still healthy enough to travel, and I can continue to give back to the community through volunteer work. My wife is retiring in March, and we already have some trips planned. So it’s time.” Nancy, John’s wife of 44 years, is retiring after 30 years as a registered nurse at St. Francis Mooresville. John remains active. He enjoys golf, plays on a tennis league, and works out at Core Fitness five days a week.

John was born and raised in Marion, Indiana, and graduated from Mississinewa High School in Gas City, Indiana, south of Marion. Upon graduating in 1962, he attended Indiana Business College in Fort Wayne for a year. “I was in a three-year program and wasn’t sure if I wanted to continue, then I received an inquiry letter from the U.S. Army. This was during Vietnam, and I saw it as an opportunity to serve. My father had been unable to serve due to health issues.” John signed on for a three-year tour in the Army, serving most of his time in Germany.

In 1967, he served the last four months in Ft. Harrison, Indiana, and upon his discharge, returned to Marion to help his mother care for his ailing father. John recalled, “I happened to get a phone call from Marion Federal Savings and Loan Association. They had an opening for a teller-supervisor. I had no past experience beyond my college and military background, and they trained me on the job.”

In early 1968 he split his time between his hometown responsibilities and Indianapolis, where he was steadily dating his soon-to-be-wife. They married in December 1968. John worked at Marion Federal Savings and Loan for 18 months and took a new position at Citizen’s Federal Savings and Loan in Indianapolis. At this point, John committed himself to remain in the banking industry, and he worked his way up the ladder and started a family. He also earned his Associates Degree in Accounting from IUPUI.

In 1978, he joined Mooresville Federal Savings and Loan as Vice President and Treasurer, accepting his first position in the county he would come to consider home. In 1992, the bank was purchased by First Indiana Bank. John became security officer. He continued to reside in Mooresville, but worked in Indianapolis for the next decade, where he oversaw 28 branches in the region…