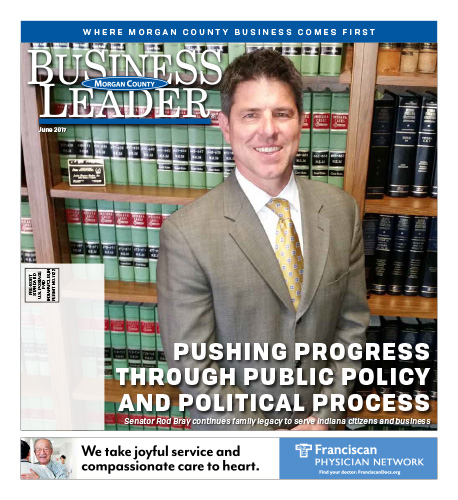 It is not uncommon for someone whose grandfather and father are at the helm of a law firm for the third generation son to become a lawyer, too. Rodric Bray grew up in a family environment was a consistent topic of conversation and public service was a tradition.

Rod’s grandfather, William Bray, graduated from Indiana University Law school and served as prosecuting attorney of the fifteenth judicial district in Martinsville until 1930 when he started his own firm. He took six years out to serve in the US Army. He returned to his private practice in 1946 with the rank of colonel. In 1951, William was elected to Congress where he served until 1975.

The legacy of law and service continued with Rod’s father, Richard. He also graduated from Indiana University and practiced law in the Martinsville firm with his father. From 1958 to 1970, Richard was the Morgan County Prosecuting Attorney. In 1974, Richard was elected to the Indiana House of Representatives where he served until 1992 when he won a seat in the Indiana Senate.

With a heritage of law and political service in his family, and probably in his DNA, it may not be surprising that Rod chose to pursue a career in law and then went on to become an elected Indiana Senator. But it was his choice, not to meet the expectations of others.