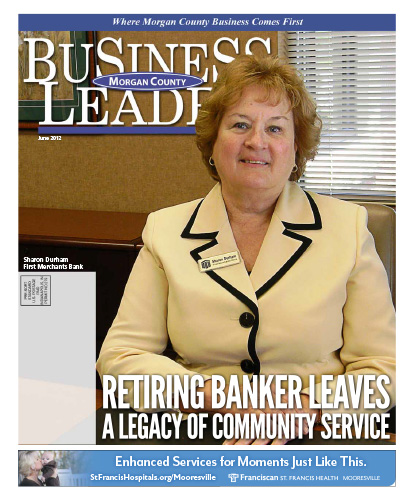 Sharon Duram is retiring, concluding 47 years in banking, customer service, and community leadership. She ends on a high note: nine years as Bank Manager of the First Merchants Bank in Mooresville with six grandchildren, a retired husband, and a brother and sister who reside locally, Sharon has made the decision to spend more time with her family.

Sharon notes that in an industry filled with fast turnaround, the directorship of First Merchants marks the longest she’s remained with a single branch, and says that Mooresville is where she has made the biggest impact and the most friends.

Sharon grew up with her family moving several times between the south side of Indianapolis, and Tampa, FL. She graduated high school and ultimately returned to Center Grove. “I went to work for Block’s in Southern Plaza, and just around the corner was an AFNB bank. I started there in March 1967 as a float teller. A couple years later, I married and Steven joined the air force. Banking was a good industry in my situation, because I could find a job at a local bank wherever he was stationed.”